A Day in Verona

Vibrant Verona seamlessly combines the old-world aesthetic of pink palazzo-lined cobblestone streets and Roman ruins with chic contemporary restaurants and boutiques, giving visitors photo-ops rivaling a hill town enlivened by the cultural sophistication of an Italian capital. Located almost precisely halfway between Milan and Venice, this lovely yet underrated city is a perfect stop-over for those traveling between these two major hubs, or a day trip from the northern lakes or many of the most popular ski resorts in Veneto or Trentino-Alto Adige. 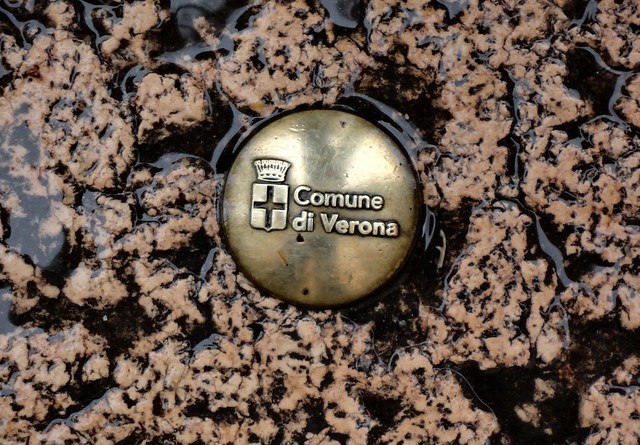 Though Verona can get crowded during its two major annual events (April’s Vinitaly wine conference and the summer opera season), its small and easily walkable center is generally buzzing with many more locals than tourists, giving visitors a peek into the workings of an authentic Italian city.

Tweetable: Halfway between Milan and Venice, picturesque and sophisticated Verona is a perfect stop-over.

Our favorite local guide suggests a walking itinerary that leaves from Piazza Bra and continues toward the Adige River, where there is a pretty view over the surrounding hills and the Castelvecchio castle. From here, pass through the Roman Borsari city gate to Piazza Erbe, and make your way to “Juliet’s Balcony”, the Arche Scaligere in Piazza dei Signori, and “Casa di Romeo”. 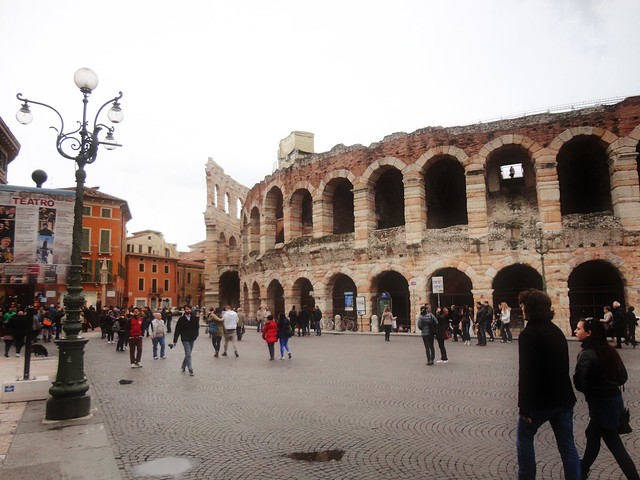 The Arena and the Roman Theater
Verona has two excellent Roman sights: L’Arena and Il Teatro Romano. The former in Piazza Bra is one of the best-preserved amphitheaters in Italy, dating from the first century AD and originally capable of holding more than 30,000 spectators. A catastrophic earthquake in 1117 destroyed most of the original pink and white limestone outer facade, but the interior is remarkably intact and retains the outstanding acoustics which makes it one of the most spectacular venues for concerts, opera, and other musical performances during the summer months. The equally well-preserved Roman Theater and its adjoining archaeological museum on Via Redentore is a treasure trove of ancient art and architecture (and offers a beautiful bird’s-eye view over Verona from the top).

Romeo and Juliet
It was a Brit who put Verona on the map for much of the English-speaking world, telling the tale of star-crossed lovers and warring families in this exotic Northern Italian setting. Shakespeare’s “Romeo and Juliet” has led to a steady flow of romantics who visit “Juliet’s Balcony” (lovely, but a 17th century addition to the 13th century Palazzo Cappello) and “Romeo’s House” (again, a prettily crenelated complex once belonging to the Montecchi family, but almost certainly never home to the Bard’s fictional character), sighing over loves lost and found. But who are we to dismiss romance? A visit to at least one of these spots is to Verona as a picture of the leaning tower is to Pisa. 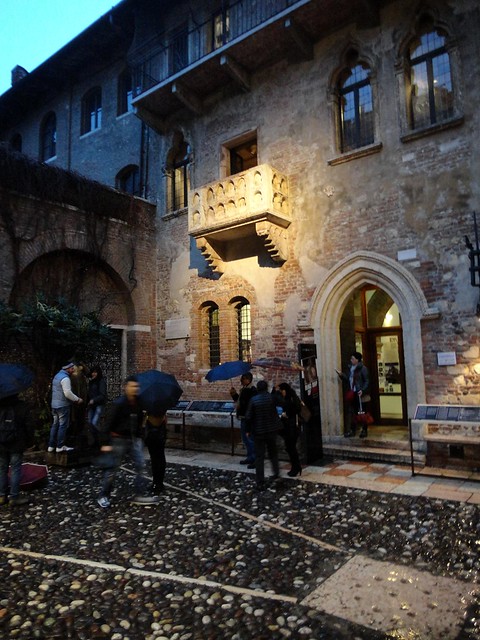 Le Arche Scaligere (Scaliger Tombs)
This group of five funerary monuments are dedicated to illustrious members of Verona’s noble Scaligeri family, who ruled the city for most of the 13th and 14th centuries, including Cangrande I, friend and patron of Dante, to whom the great poet dedicated his “Paradiso”. Located in the courtyard of the church of Santa Maria Antica (behind an intricate wrought iron gate worked in a decorative motif including ladders, a reference to the “scala” etymological root of the family name), the five intricately sculpted “arche”, or tombs, are beautiful examples of the 14th century Gothic style.

Tweetable: Verona has culture and cuisine, but romantics flock to their Romeo & Juliet sites.

Verona’s citizens are a chic crowd, breaking up their elegant strolls down Via Mazzini and Corso Porta Borsari to stop in at the numerous boutiques which line these main shopping streets. 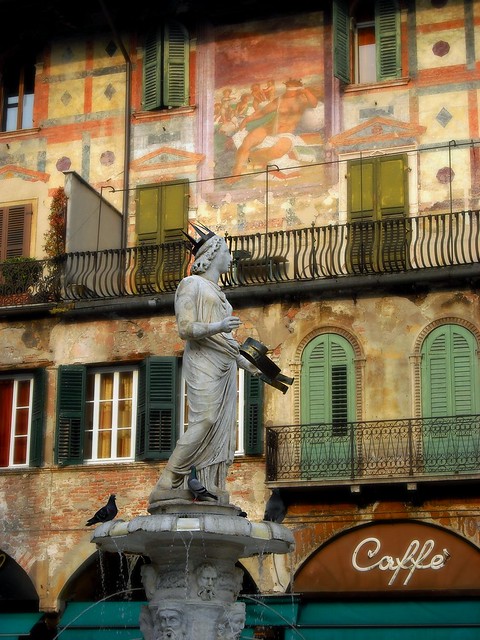 Alkimia
The stretch of Via Mazzini between Piazza Bra and Piazza delle Erbe is thick with swish shops like Alexandra Boutique (n. 11) and Pavin (n. 35) which carry famed luxury labels from Gucci and Valentino to Tod’s and Prada. For brands with less name recognition but more cool, stop in at Alkimia (n. 32), which carries a number of international designers for men and women who are a bit less ubiquitous and a bit more edgy.

Lo Scrittoio
Near Porta Borsari, this tiny wood-paneled shop is a writer’s dream, with the most luxurious of stationary, pens, notebooks and journals, and desk accessories. Even for those who find no joy at setting pen to paper, the gorgeous tooled leather photo albums, vintage letter openers and magnifying glasses, and Italian briefcases tucked away at Corso Porta Borsari, n. 18 all harken back to a more refined age.

Antiques
If the vintage delights at Lo Scrittoio whetted your appetite for treasure hunting, head to the area surrounding Corso Santa Anastasia, where the main street leading to Verona’s Gothic Chiesa di Sant’Anastasia is crowded with eye-popping antique stores featuring everything from fine art and furnishings to collectables and books from centuries past. Many more shops are tucked away on the narrow surrounding side streets, so have a wander. 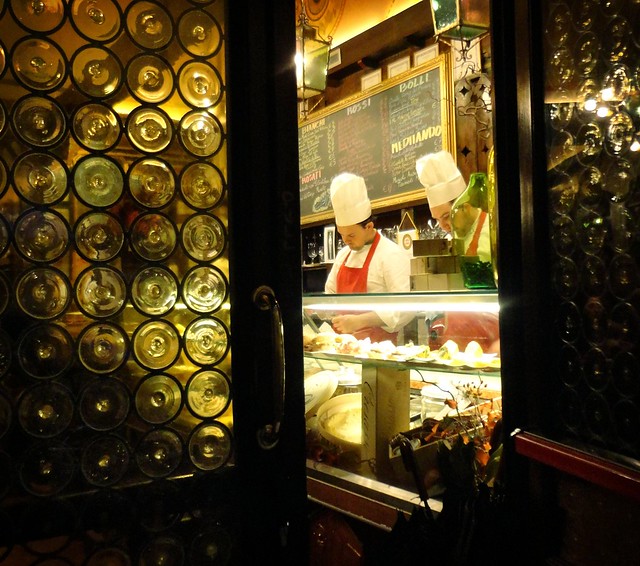 The Veronesi know how to live well, and this includes excellent cuisine. Look out for the region’s flagship wines: Amarone di Valpolicella, a rich red made from passito (partially dried) grapes and Soave, a dry white which can be both still or sparkling. Look out also for one of Verona’s local specialties: horse meat (either to sample or to avoid, depending). 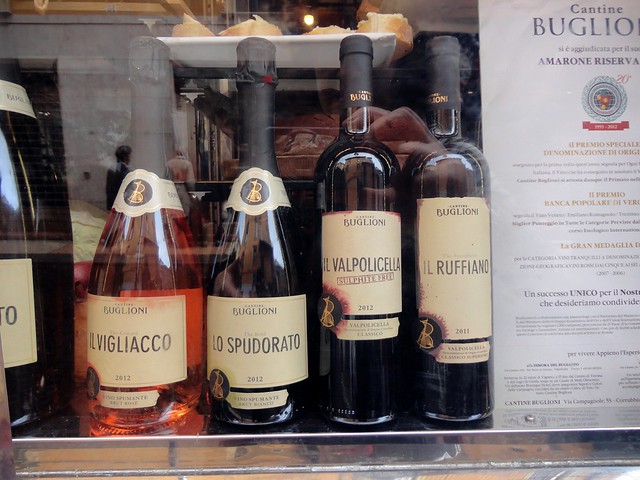 Il Desco
To see just how well one can live in Verona, book a table at Michelin-starred Il Desco, where the elegance of its 5th century palazzo dining rooms is matched by that of chef Elia Rizzo’s dishes. Inspired by traditional Venetian cuisine, these surprisingly innovative takes on the region’s classic ingredients and extensive wine cellar add up to a spectacularly unforgettable meal.

Al Pompiere
For excellent local cuisine in a more casual setting, locals have been flocking to Trattoria Al Pompiere for over a century. Founded by retired firefighter (hence the name), this charming eatery with its checked cloth-covered tables and walls crowded with photos of illustrious clients features a cured meats bar, with over 50 types of Italian salumi, a cheese bar with more than 100 cheeses, and a menu of simple yet excellent Venetian and Veronese dishes.

Pasticceria Flego
This café on Via Stella has been serving the Veronese their morning cappuccino and pastry and leisurely afternoon tea since 1947. Though they moved to their current location in 2008, the shop has retained a bit of its historic elegance, with leather couches and chandeliers serving as backdrop to their traditional Venetian pastries and sweets.

Tweetable: Traveling to Verona? Look out for one of the local specialties: horse meat (either to sample or to avoid, depending).