Totally Tuscan: Arezzo and Cortona in a Day

Tuscany is known for its crown jewel, the Renaissance city of Florence, and for its lovely gem-like hilltop villages which perch over picturesquely rolling vineyard-covered countryside. But tucked between these two categories are a number of medium sized provincial towns, quieter than bustling Florence but slightly larger than a sleepy hilltown, and perfect for a day trip or a stopover while traveling in Tuscany. 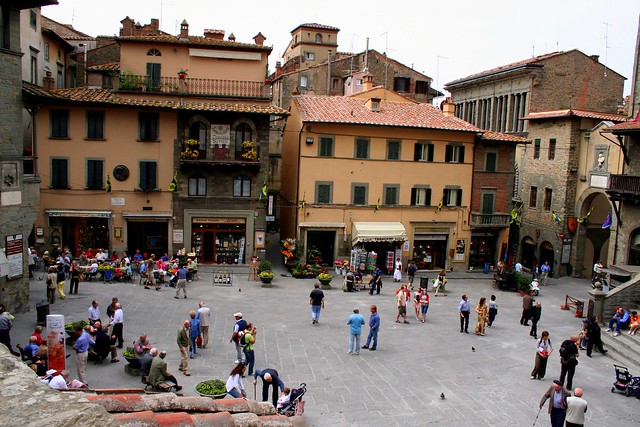 Two of these are Arezzo and Cortona, located a bit more than an hour outside of Florence and close enough to each other that they can be easily combined into one day. The former, Arezzo, is an elegant provincial capital with important Etruscan roots. Set on a hilltop overlooking four valleys - Val Tiberina, Casentino, Valdarno, and Valdichiana - visitors may recognize the town as the setting of Roberto Benigni's Oscar award winning film “Life is Beautiful”. The latter, Cortona, is set on a hillside overlooking placid Lake Trasimeno and became a popular destination for travelers after Francis Mayes' “Under the Tuscan Sun” book - and subsequent film - came out, which recounted her adventures purchasing a villa right outside of the town center. 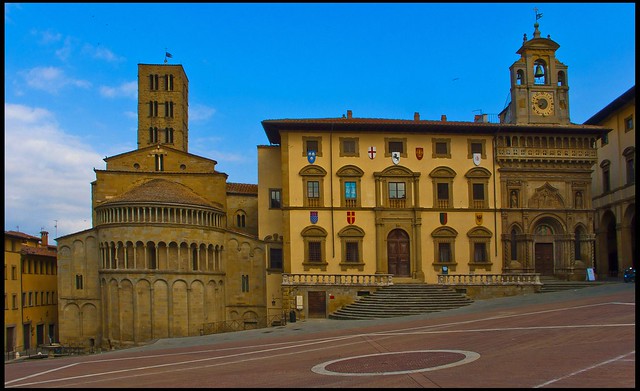 Arezzo, as the larger of the two , offers much notable art and architecture despite the heavy damage the city suffered during World War II, and an authentic, lived-in feel to its historic center; Cortona is much smaller and caters more visibly to tourism, despite not having any major cultural draws outside of the star-power of a Hollywood movie. Combined, they are a pleasing foil to each other, and a perfect combination for a totally Tuscan day of discovery.

The Medieval Piazza Grande is the most important square in the town center, and its social heart. Ringed by a line of facades dating from the late Middle Ages through the Renaissance - many designed by important architects including Vasari, Giambologna, and Rossellino - this piazza is the perfect point to begin a visit to the town and for an espresso break or meal with a view. Stop in the 13th century church of Santa Maria della Pieve, the pretty Romanesque apse of which faces onto the piazza, the Palazzo della Fraternita dei Laici, and the Vasari Loggia. During June and September, the piazza is transformed for the Giostra del Saraceno festival, with costumed processions, flag and drum corps, and a jousting competition on horseback between the four historic quarters of Arezzo. 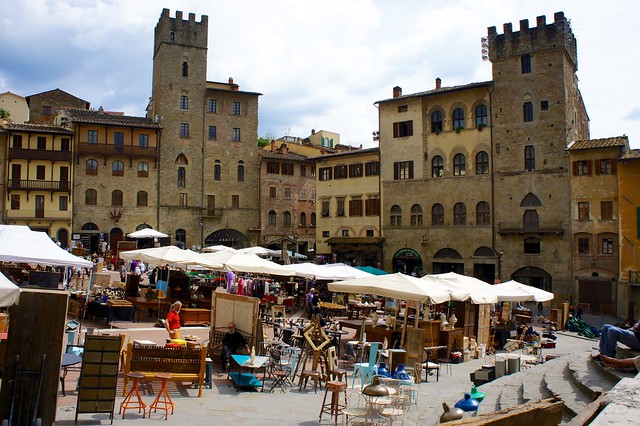 The town of Arezzo is one of the stops on the Piero della Francesca trail, and two important works by this native Renaissance painter are located here. In the Church of San Francesco, the Legend of the True Cross fresco cycle, painted in the mid-15th century, is considered Piero della Francesca’s finest work and a masterpiece of the early Renaissance. Nearby, Arezzo's Duomo (Cattedrale di Santi Pietro e Donato) is where della Francesca was commissioned to paint a Mary Magdalene immediately after completing the Legend of the True Cross.

At the highest point in town, the Medici Fortress has lovely views over the surrounding valleys and is surrounded by a lovely park thick with shade trees, perfect to catch your breath from touring and let younger travelers blow off a bit of steam.

As one of Tuscany's wealthiest towns, Arezzo has an elegant air to its shops in the historic center and is known for two high-end artisan crafts: gold jewelry and fine linens. The center of town is dotted with small “orafo” jewelry boutiques showing unique, handcrafted wares primarily in gold, but also in silver and platinum, ranging from linear, contemporary pieces to intricate beaded and filigree designs. One of Italy's most famous producers of linens for the home, Busatti, was founded in the nearby town of Anghiari over a century ago, and there is a Busatti store in the center of town on Corso Italia where you can find bed and bath linens, beautiful tablecloths, and upholstery fabric.

Arezzo is also the site of one of the most popular monthly antique markets in central Italy, held in Piazza Grande the first Sunday of each month, where everything from furniture to art is sold from outdoor stalls lining the square and surrounding streets.

Arezzo's most famous restaurant is Buca di San Francesco, located in a historic building which was once part of the adjoining church. We enjoyed lunch at the Logge del Vasari restaurant right on the Piazza Grande and, for something more informal, also recommend Antica Osteria L'Agania. 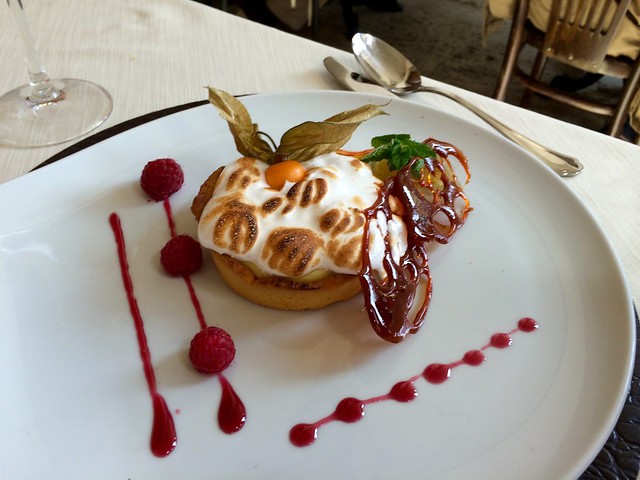 Where Arezzo has a long and illustrious history as a wealthy and powerful Etruscan and Renaissance center, Cortona spent much of its history as a relatively sleep provincial town until being nudged into the spotlight after “Under the Tuscan Sun” became a success. The charm of the town is more wandering its steep, narrow lanes and enjoying the views over the shimmering waters of Lake Trasimeno and the surrounding patchwork of fields and vineyards from Piazza Garibaldi (known by locals as Piazza Carbonaia) than visiting important monuments or sights. The town's main square is Piazza della Repubblica, dominated by the town hall and clock tower, and the perfect spot for a cappuccino and few minutes of people watching. 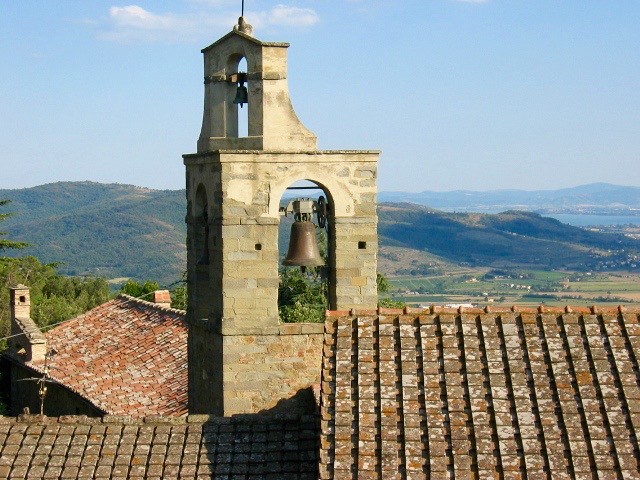 The most notable works of art in town are three paintings by Fra Angelico: an “Annunciation” and a “Madonna and Child with Saints” in the local Diocesan Museum, and a fresco above the entrance to the Church of San Domenico, all of which were painted during the artist's stay at Cortona in 1436. There are also two lovely Renaissance churches located in the countryside outside the city walls: the domed Santa Maria Nuova, built by Giorgio Vasari in 1554, the interior of which is currently closed to visitors; and Santa Maria delle Grazie al Calcinaio, built between 1484 and 1515 by Francesco di Giorgio Martini. Visitors can view the "Madonna del Calcinaio" image inside, said to perform miracles. 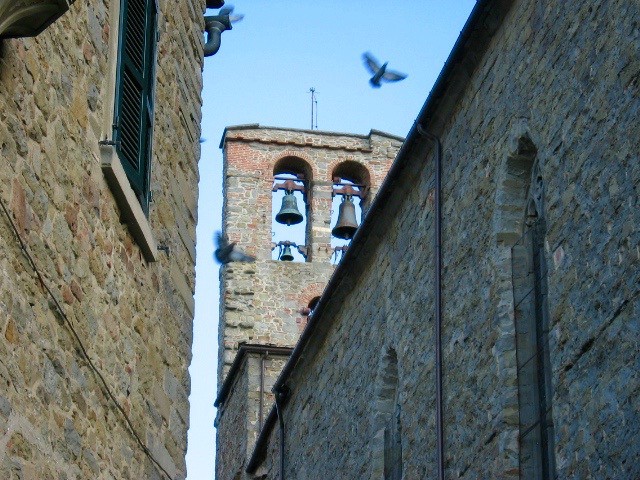 For archaeology enthusiasts, Cortona's Museo dell'Accademia Etrusca, located in the 13th century Palazzo Casali (Palazzo Pretorio) on Piazza Signorelli, has an excellent collection of Etruscan, Egyptian, and Medieval artefacts. The most notable is the bronze “lampadario”, an Etruscan hanging lamp unearthed at Fratta near Cortona in 1840 but believed to be from an important northern Etruscan religious shrine and dating from the second half of the fourth century BC. 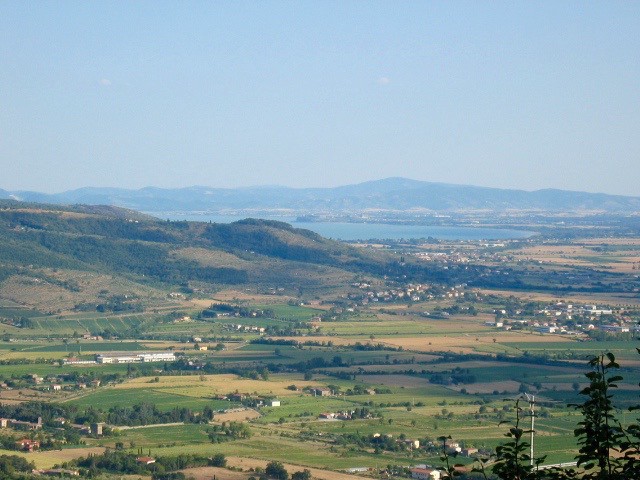 Cortona is much more of a tourist town than Arezzo, and most of its shops in the center are geared towards tourism. There are a number of artisan workshops selling leather and ceramics, antique stores, art galleries, and gourmet shops with unique, high quality - if pricey - wares. 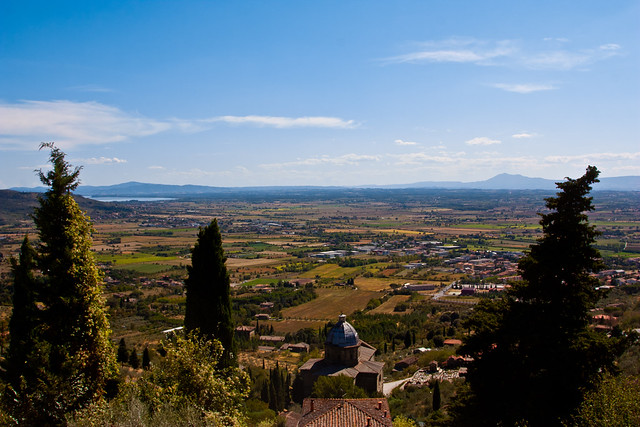 Cortona is thick with restaurants, from fine dining to informal cafés. La Buccaccia is one of the most popular restaurants in the center, combining rustic stone walls with excellent Tuscan dishes. For a more informal meal, Bar 500 has a light menu of salads and sandwiches, and outdoor seating.