This is the season in which you’ll want to have some indoor touring options up your sleeve so you can fill a few hours when the weather turns biting cold or uncomfortably wet. With luck, your autumn trip will be a mix of days temperate enough to enjoy meandering through the streets and sipping an espresso al fresco and the odd sudden shower driving you indoors to check out a museum or art gallery. For the latter case, here are some suggestions for art exhibits to check out across Italy this fall:

Titian to Rubens: Masterpieces from Antwerp and other Flemish Collections
Running until March 1, 2020
More information: see here
This group of sumptuous canvases gathered from leading Flemish museums are displayed in the lavish rooms of the Doge’s apartment in Venice’s Palazzo Ducale, and includes works by Titian, Peter Paul Rubens, Anthony van Dyck, and Michiel Sweerts. Many of these painting are very rarely lent and a handful have never been shown in public, so the exhibition offers a rare opportunity to see pieces from both private and museum collections in one space. 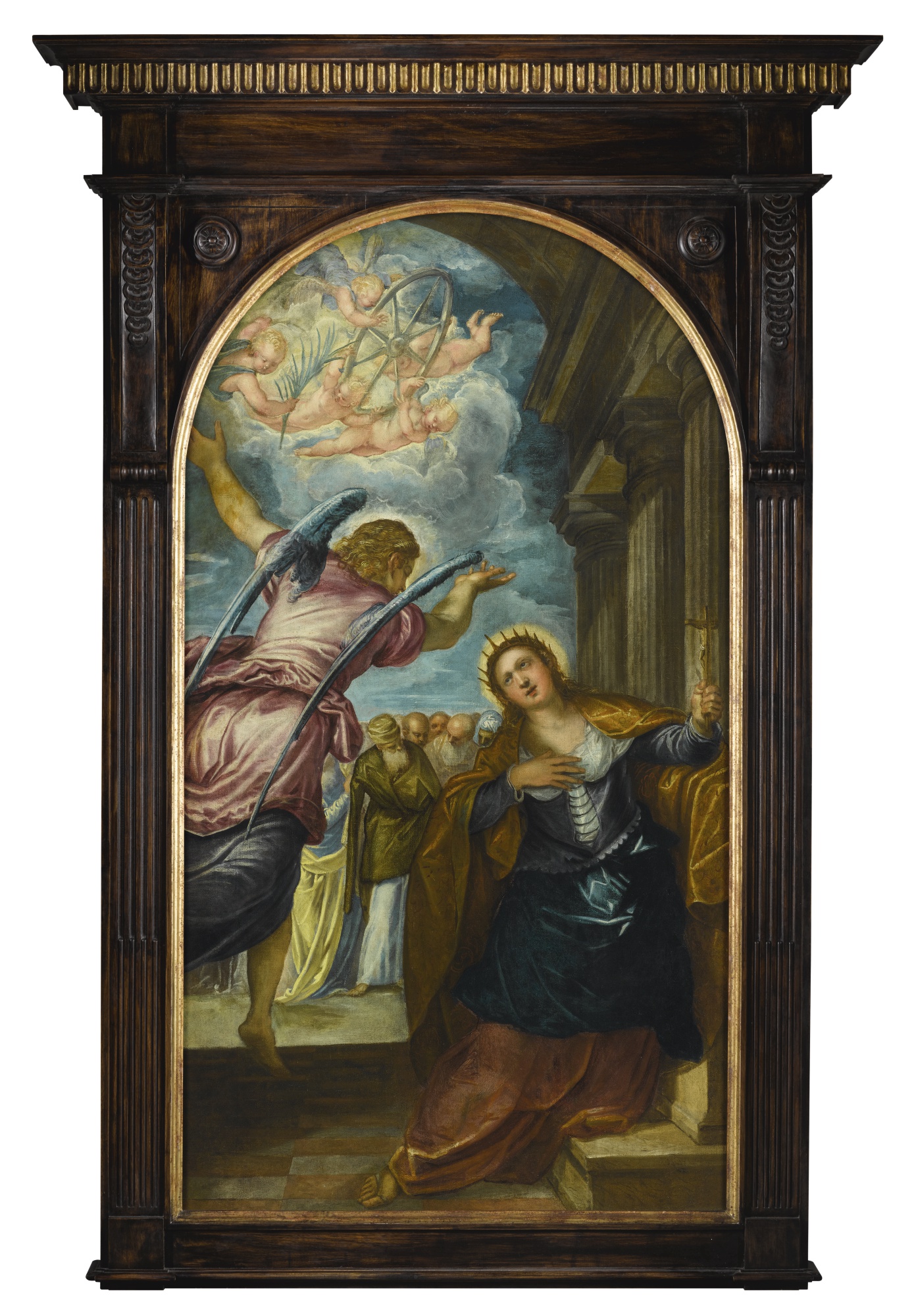 By Tintoretto (Photo via Wikimedia Commons)

Be sure to take in three Venetian works that have made their way back to the Floating City for the first time: Jacopo Pesaro Presenting Saint Peter to Pope Alexander VI and Portrait of a Lady and her Daughter, both by Titian; and he altarpiece of the former San Geminiano church by Tintoretto, known as “David Bowie’s Tintoretto” as it was part of the artist’s private collection for many years.

Peggy Guggenheim: The Last Dogaressa
Running until January 27, 2020
More information: see here
Set in Peggy Guggenheim’s former residence of Palazzo Venier dei Leoni, this exhibition pays homage to one of the most important patrons of the arts of the 20th century by showing 60 paintings, sculptures, and works on paper acquired between the end of the 1940s and 1979, the period in which she lived in Venice. The exhibition includes works by René Magritte, Francis Bacon, and Marina Appolonio, as well as Guggenheim’s scrapbooks that have never displayed before. Of note is the The Empire of Light, one of the finest works by René Magritte and a jewel of the Guggenheim collection—but not always shown publicly.

Fra Angelico’s restored Last Judgement in the San Marco Museum
Permanent display
More information: see here
This 15th-century painting by Fra Angelico is considered one of the most unique the friar and artist created, with a mysterious commission and singular composition that includes an unusual trefoil in the upper register. The work has been restored to mark the 150th anniversary of the San Marco Museum, and today the cleaned Last Judgement dazzles with newly vibrant colors. Note the crowd of figures that includes apostles and saints from the Old Testament like Adam and Eve, Abraham, and Moses...an innovation at the time.

Fondazione CR Firenze Art Collection
Running until January 1, 2020
More information: see here
The Ente Cassa di Risparmio di Firenze (the foundation of one of the city’s most historic banks) owns a treasure trove of art dating from the 14th to the 20th century, including masterpieces like two small tondi by Giotto, a panel painting by Beato Angelico, and works by Renaissance masters including Filippino Lippi and Giorgio Vasari. The collection is held in the foundations headquarters at Via Bufalini n. 6 just steps from the Duomo in central Florence and is closed to the public.

From now until the end of the year, every third weekend of the month the collection is open to visitors, who can take in the works via a free guided tour that must be booked in advance. Dates for the remainder of 2019 are 19/20 October, 16/17 November, and 14/15 December. To reserve call +39 055 5384001 or write incollezione@fcrf.it.

Secret Impressionists
Running until March 8, 2020
More information: see here
The 17th-century Palazzo Bonaparte, overlooking the busy intersection between Via del Corso and Piazza Venezia in Rome’s bustling heart, was once the residence of Napoleon's mother. Today the palace is an important new exhibition space, opening with a blockbuster exhibition of more than 50 Impressionist works gathered from important private collections around the globe. Many of the paintings are being shown publicly for the first time, and include works by artists like Monet, Renoir, Cézanne, Morisot, and Gauguin. This is one of the most publicized and popular art exhibitions running in Rome this year, so be sure to reserve tickets in advance.

Canova: Eternal Beauty
Running until March 15 2020
More information: see here
An exhibition of works by the 18th-century Italian sculptor Antonio Canova is currently running at the Museo di Roma in Palazzo Braschi in Rome. Considered one of the greatest neoclassical artists, Canova is best known for his works Amore e Psiche, Tre Grazie, and Paolina Borghese. This exhibition groups more than 170 works by Canova and his contemporaries loaned by museums from the Hermitage in St. Petersburg to the Vatican and traces the evolution of Canova’s style over the decades and his ties with the city of Rome.