Though Florence's Arno is a picturesquely placid river most of the time - the perfect spot for a sunset row or the backdrop for a romantic snapshot from the Ponte Vecchio - once every few years an exceptionally heavy rain passes through Tuscany and the river rises and swells, flooding its banks and almost reaching the level of its historic bridges and retaining walls. It is during these tense hours that Italy is reminded of one of its most destructive natural disasters in the last century: the flooding of Florence on November 4th, 1966. 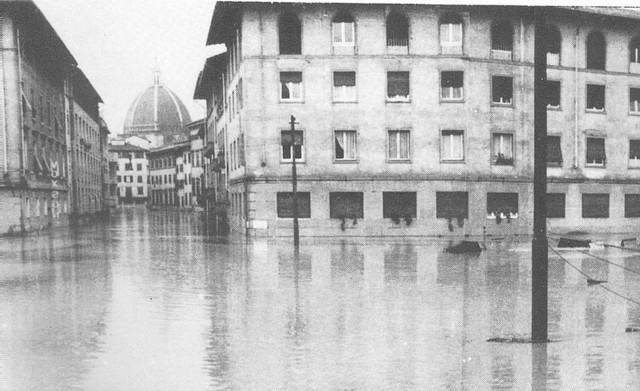 The Arno has overflowed its banks many times throughout history, but this flood was one of the most devastating, killing 17 Florentines (and 18 others in neighboring towns) and leaving thousands of families homeless. Countless works of art, antique books, and historic documents were lost or damaged by the water and mud that flooded the lower levels of the city's churches, libraries, and archives, some of which have yet to be restored. 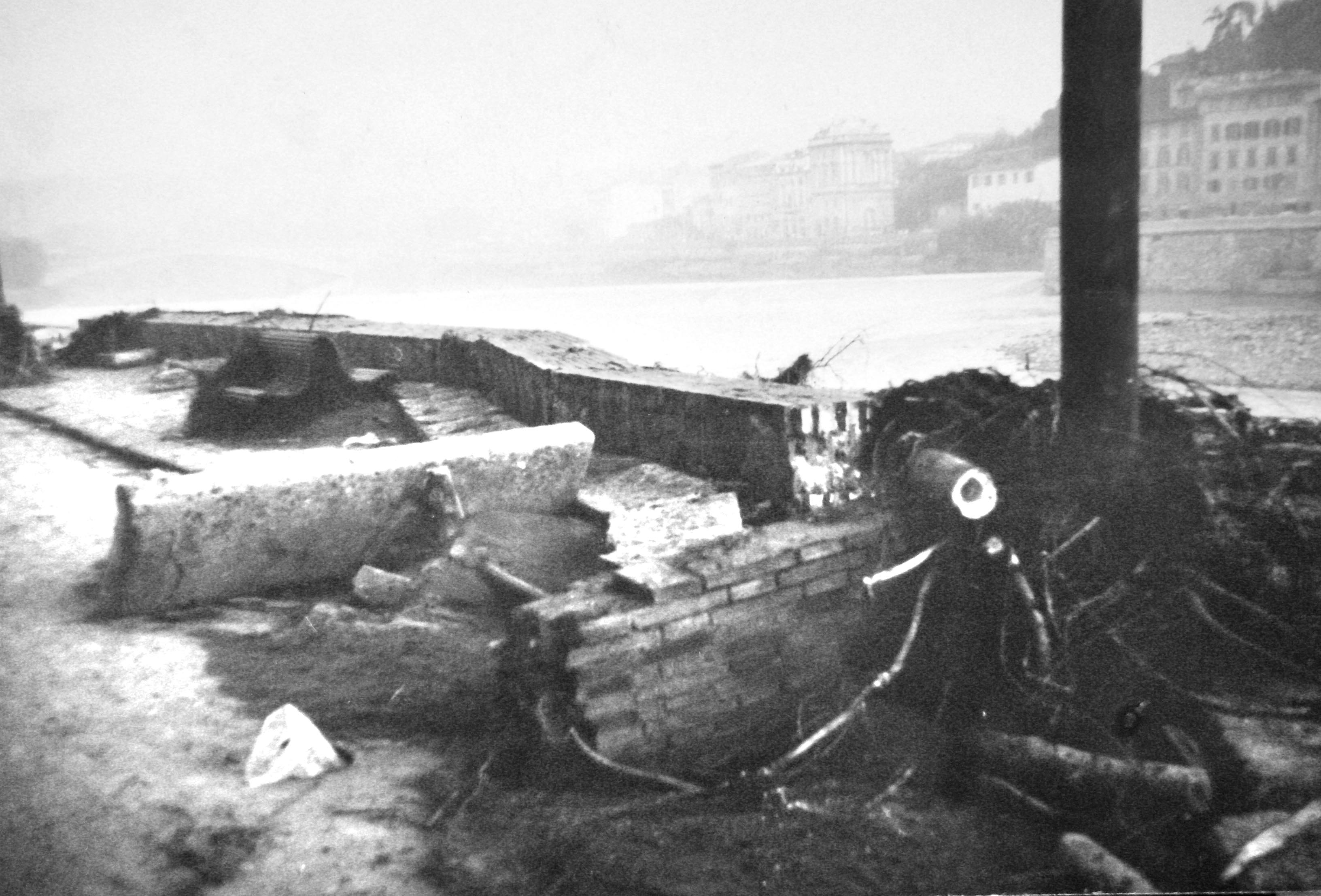 Decades have passed since that terrible day, but traces of the flood still remain in the city, both physically and in the living memory of its citizens.

Florence has seen disastrous floods over the past centuries, but by the afternoon of November 3rd, 1966, it was becoming clear that the city was in grave danger. It had been raining steadily for the past two days, and reports of town and countryside flooding from the upriver province of Arezzo were increasing as Tuscany's rivers began to flood their banks. Families were trapped on the roofs of their farmhouses, roads and railways were closed, and the first news of basement flooding in Florence's city center was recorded by the fire and police departments.

During the night, the situation in Florence became increasingly dramatic. Franco Nencini, the only reporter working the night shift at the La Nazione newspaper headquarters, telephoned Carlo Maggiorelli, the supervisor at the city's Anconella Water Treatment Plant, for information about what the journalist now realized was a critical situation; Maggiorelli drowned while on the phone with Nencini, becoming Florence's first flood victim. 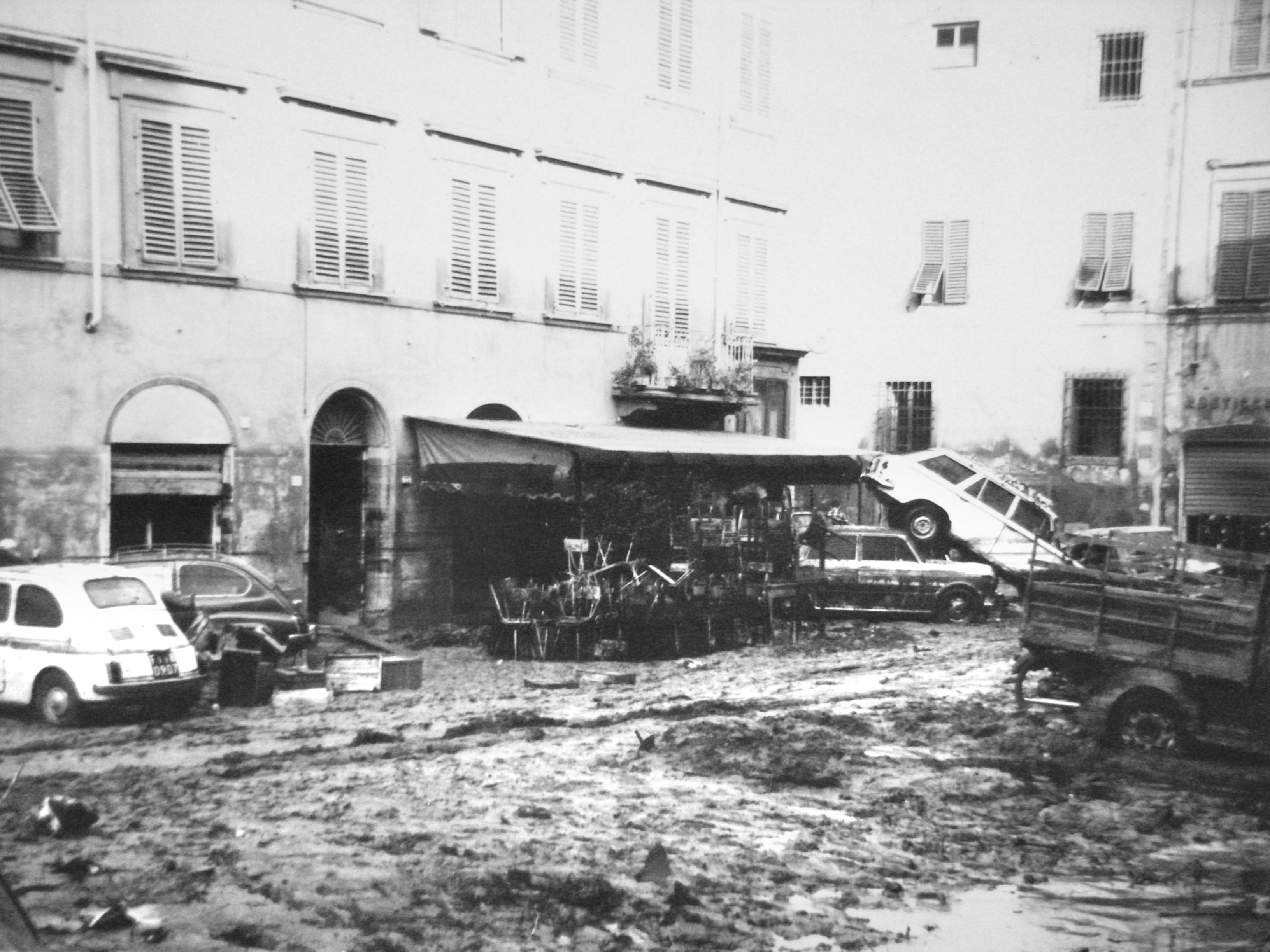 
At around the same time, city officials began contacting the Ministry of the Interior in Rome to request emergency assistance, but by 4 am the Arno had overrun its banks, flooding most of the historic center. It took a full 24 hours before the central government in Rome began to realize the gravity of Florence's flood. Troops were eventually sent to aid in rescuing stranded citizens and begin the clean up effort.

Florence's flood was one of the most destructive in Italy in the 20th century, damaging homes and businesses and leaving thousands without shelter or work. The flood happened during a holiday weekend when many Florentines had left town or were not commuting in to their places of work, so the final death toll was much lower than it could have been. The devastation caused by the water, mud, and debris, however, was vast.


Water had risen to a level of 6 meters (over 19 feet) in some parts of the city, and the effect on this historic capital's wealth of art and historic documents was staggering. Precious volumes, documents, and manuscripts were damaged in the Archives of the Opera del Duomo, the Biblioteca del Gabinetto Vieusseux, and the Biblioteca Nazionale Centrale Firenze, all of which lost at least half of their collection. The State Archives, where the city's civic, judicial, and administrative records were kept, were also flooded. 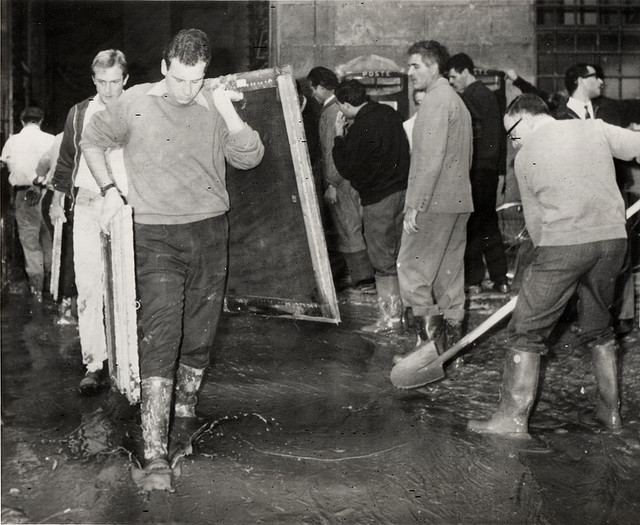 The city's rich artistic patrimony was also affected, as flooding damaged works in major museums including the Uffizi, Florence's historic churches, and many private collections. Most notably, Cimabue's Crucifix in the Church of Santa Croce was severely damaged by flood waters (it was restored in the decade following the flood), as were Ghiberti's *Gates of Paradise* and Donatello's Penitent Magdalene, both of which were restored and are now displayed at the new Opera del Duomo Museum. Vasari's Last Supper sustained such heavy damage that it is still under restoration, scheduled to be completed this year in commemoration of the 50th anniversary of the flood.

All native Florentine's have very moving stories of where they or, in the case of younger citizens, their parents or grandparents, were during the flood. The historic center of the city is dotted with small plaques marking the height of the flood waters in specific squares or streets, and it is astounding to see marble markers 4 and 5 meters (16 feet) above the street level. Florentine's speak almost warmly of this time of great suffering countered by a deep sense of solidarity and municipal pride: despite their reputation as being a bit stand-offish, Florentines opened their homes to strangers during the weeks following the flood, and banded together to clean the streets, feed the hungry, and begin rebuilding.

There are stories of rescue efforts that ended well, such as the case of a man clinging to the top of a streetlamp with the rushing water up to his head, who was heroically saved by neighbors who knotted together sheets to make a rope and drag him to safety. Unfortunately, there are also stories of rescues that ended sadly. One of the most moving monuments to the flood is the plaque on the side of a small house on Via San Giuseppe, where Elide Benedetti died in the flood waters. The elderly woman was trapped inside her house and despite efforts by rescue workers and neighbors, the strong metal grates covering the windows could not be cut in time to free her from the rising waters. The parish priest and others held her hands until she drowned so she would not die alone.

Perhaps the most famous legacy of the Florence flood are the famous “mud angels”, volunteers from across Italy and the world who flocked to the Renaissance capital to help clean the city center of debris and mud and rescue works of art, books, and historic documents from flooded museums, archives, and libraries. Conservation experts from across the globe volunteered their time and expertise in the conservation of Florence's damaged treasures for months and years to come. These “angeli del fango” have been celebrated in a number of books and documentaries over the decades, and there are plaques praising their work on a number of sites around the city. 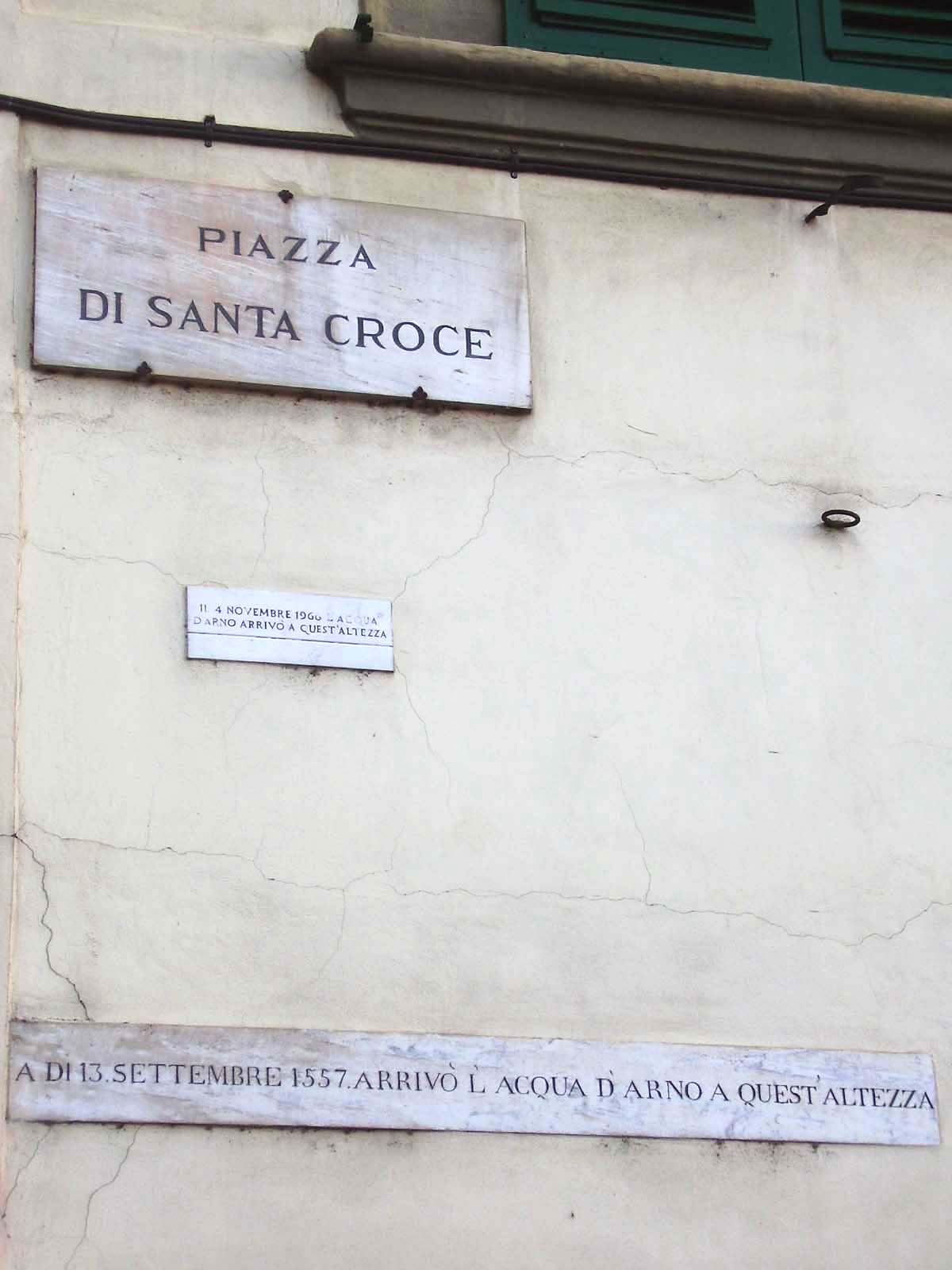 The next time you're in Florence, try to spot some of the water markers along the city streets, and make sure to visit the Church of Santa Croce and the Museum of the Opera del Duomo to admire the painstakingly restored works of art now on display. And while chatting with a native Florentine, be sure to ask about their memories of the flood...you will almost always get a moving story and a unique glimpse at this stunning city's modern history.