If you tell any Italian that you are headed to the region of Abruzzo, the very first thing they will ask is, “Are you visiting Gran Sasso?” Gran Sasso is shorthand for Abruzzo’s sprawling Parco Nazionale del Gran Sasso e Monti della Laga (Gran Sasso and Laga Mountain National Park), one of Italy’s largest national parks—indeed, covering almost 350,000 acres, one of the largest protected areas in all of Europe. 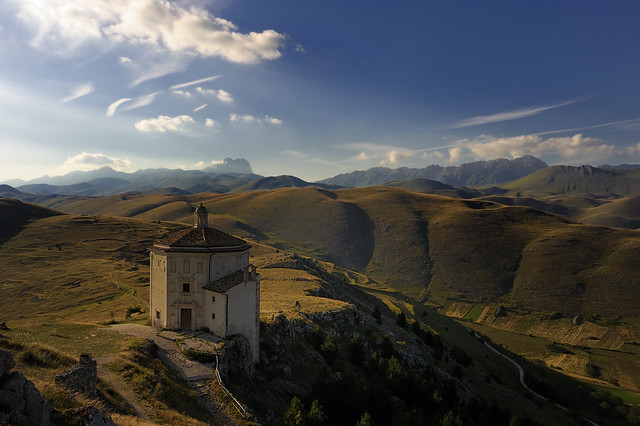 The park territory covers a wide swath of Abruzzo and includes parts of neighboring Lazio and Le Marche, as well. Inside its borders, visitors will find some of the most jaw-dropping scenery in all of Italy, including peaks from the Apennine and Monti della Laga mountain chains, pristine Alpine lakes and rivers, woodlands teeming with wildlife, and hundreds of kilometers of trails to explore by foot, bike, or horseback. 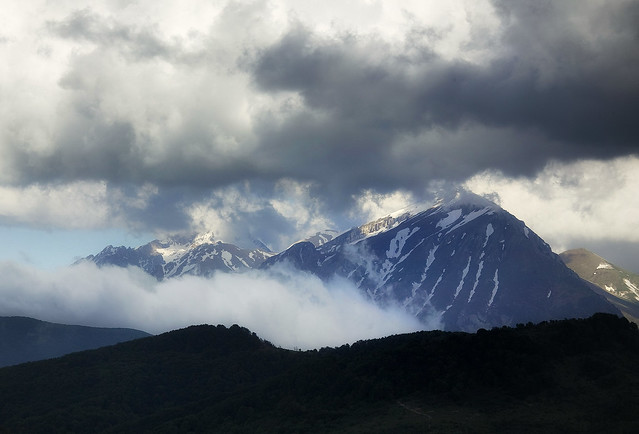 
The park includes a number of magnificent craggy peaks, including the namesake massif of Gran Sasso, which rises dramatically almost 3,000 meters above the Campo Imperatore plateau (where Mussolini was held prisoner at a remote hotel for a few months in 1943 before being freed by German allies), making for dramatic photos even for those who will never climb higher than its foot. The mountain has three main summits: the Corno Grande is the highest and home to the Ghiacciaio del Calderone, Europe’s southernmost glacier (rapidly disappearing due to climate change), followed by the Corno Piccolo (known as the “sleeping giant” because of its resemblance to a profile turned to the sky) and the Pizzo Intermesoli. Gran Sasso also includes a summit renamed in 2005 for the late Pope John Paul II, an avid outdoorsman who often visited the area. 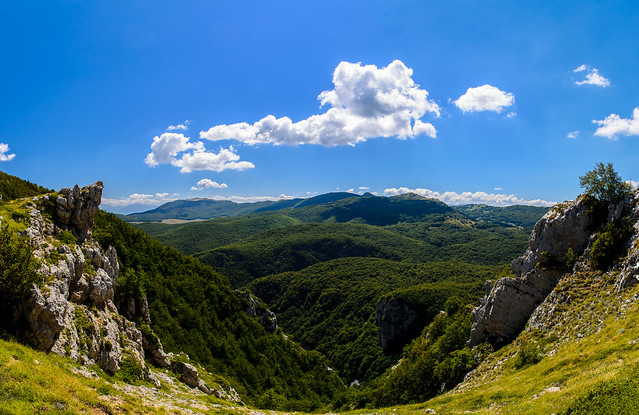 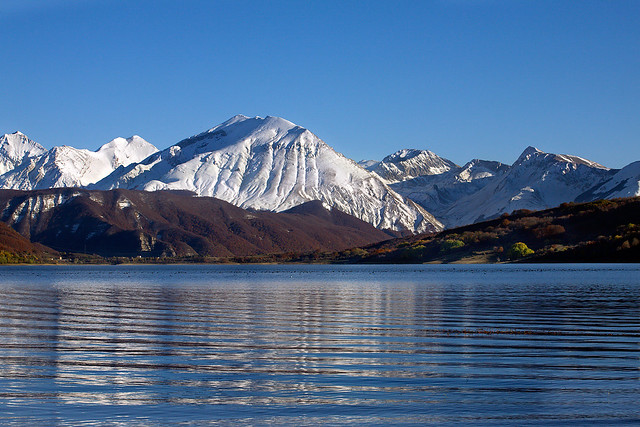 “Water, water everywhere” should be Gran Sasso’s official tagline, as the park is full of rushing, bubbling, cascading, and placidly sparkling bodies of water. Of the dozens of waterfalls that dot the park landscape, the most visited are the Morricana Falls, on the north side of Lepri Peak, and the Barche falls on the side near Amatrice. One of the park trails is aptly named Cento Cascate (One Hundred Falls), and follows a route passing a number of the more picturesque cascades. Falls mean rivers, and Gran Sasso is criss-crossed by pristine flowing waterways, including the Aterno, Vomano, Tirino, Tordino, Manove, and Tronto Rivers (to name just a few). Perhaps the most picturesque is the Salinello, which has carved a steep canyon (Le Gole del Salinello) through the Monti Gemelli over the millenia. The park also includes at least three lakes within its borders, the largest of which is Campotosto (the largest artificial lake in Europe), which is home to an enormous array of birds and other wildlife. 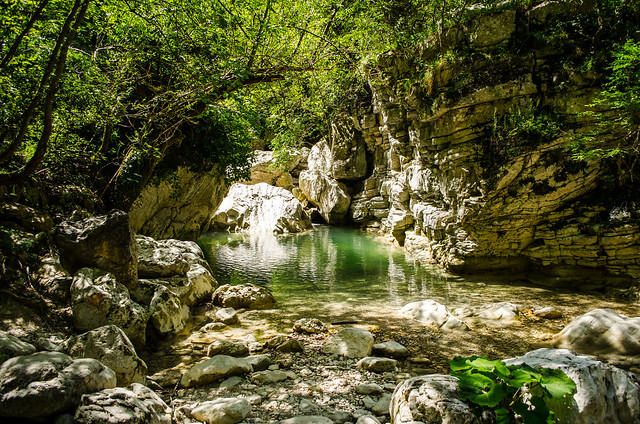 There are a mind-boggling 79 hiking and walking trails in Gran Sasso, covering hundreds of kilometers and scaled from easy to strenuous, which explore each of the 11 districts into which the park is subdivided. (This doesn’t include the seven equestrian itineraries and the dozen or so mountain biking paths!) This is a park that wants you to get out of your car and stretch your legs, and the visitor centers are a great resource for maps, information, and guides. If you aren’t feeling that athletic, the park can be explored by car by following one of the suggested “tourist itineraries”, combining this territory’s natural treasures and historical villages. Or consider taking a scenic drive along the SS 80, once one of the main routes connecting Rome to the Adriatic Coast. Built along the route of the ancient Roman Via Cecilia, this mountain highway was supplanted by the modern A24 Autostrada and is now the perfect country road for a meander.

Perhaps one of the most surprising features of Gran Sasso are the number of its treasures which aren’t strictly natural, but which combine with the scenery to form a harmonious, organic whole. Numerous archaeological sites and necropoli, churches and sanctuaries, castles and fortresses dot the landscape, reminding visitors that these mountains have been home to civilizations since the dawn of man. The most important among these sites are the numerous Benedictine abbeys tucked in these mountain valleys or perched on their slopes, including San Clemente near Casauria, San Bartolomeo near Carpineto della Nora, and Santa Maria Casanova near Villa Celiera, all in the province of Pescara. A simple way to visit these Medieval abbeys is by following the Grandi Abbazie tourist itinerary offered by the park, which combines scenic drives, stops at these and other historic and cultural sites, and a few suggestions for easy walks to break up the day. 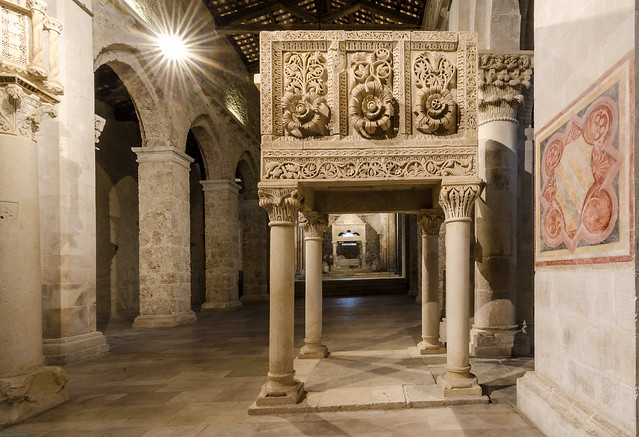 
The Gran Sasso and Laga Mountain National Park was established in 1991, superimposing itself onto a territory that has been inhabited for thousands of years. This means that there are dozens of towns and villages included within its borders, many of which are pretty gems worth a stop and a look around.

Amatrice: A small yet bustling mountain town with one of the park’s main visitors’ centers, Amatrice is also the birthplace of two of Italy’s iconic pasta dishes: Pasta all’Amatriciana and Pasta alla Gricia.

Castel del Monte: Its name says it all: this fortified town perched on a hilltop overlooking the rolling countryside of the Campo Imperatore plateau is one of the prettiest villages in Abruzzo, and its sleepy atmosphere and rough stone walls and houses hark back to its Medieval past. 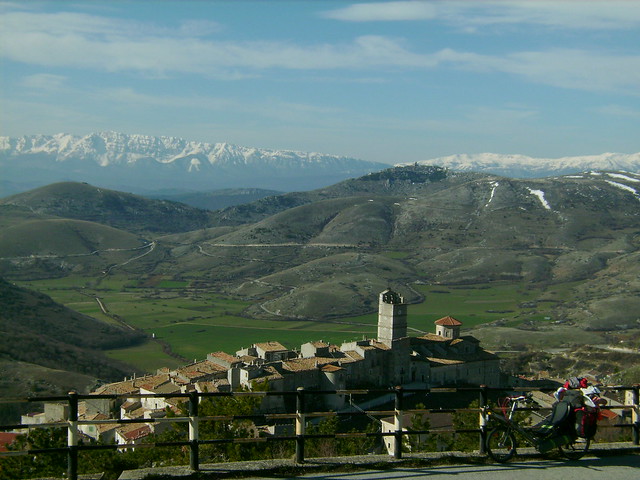 L’Aquila: One of the largest towns located inside the park ( a provincial capital), L’Aquila was heavily damaged by an earthquake in 2009 but restoration is bringing the city’s pretty Baroque and Renaissance architecture and elegant piazzas back to their former glory.

Santo Stefano di Sessanio: Another tiny yet lovely village in the heart of the park, this hamlet is permanent home to just over 100 inhabitants but fills up during the summer months with vacationers and hikers. It’s proximity to the Campo Imperatore and the pristine lake, Laghetto di Santo Stefano di Sassanio, make it a perfect base for exploring the area. 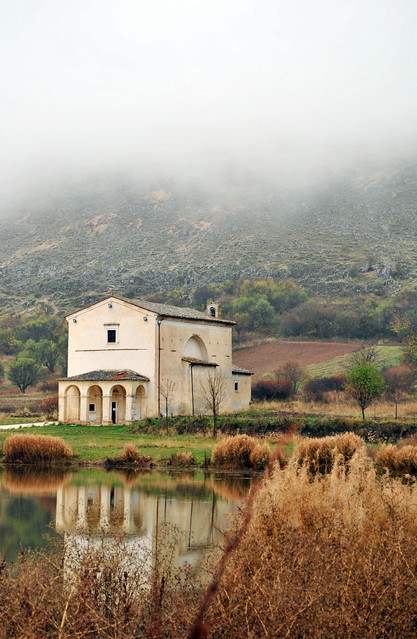 Related posts:
So You Want to Hike in Italy...
Exploring the Dolomites in Summer
Unique Train Rides in Italy: International and Gastronomic Routes