In Season: 5 Italian Spring Foods To Welcome the Season Spring is not only a time to appreciate the first tender flower buds and new leaf shoots signifying nature’s awakening from its winter slumber. It is also when Mother Nature challenges us to her great food scavenger hunt.

In Italy, most of all.

Fluffy fronds of fresh fennel provide a frilly backdrop to newly sprouted daisies. Spindly shoots of segmented, bamboo-like asparagus hide in ditches beside roads or in weeds among olive groves. Explosions of piercing blue star-shaped borage flowers lure you in while the tough, nettle-like stems tease you away.

Spring’s first plants, the most delicate shoots carrying the most subtly verdant flavors of the year, are rapidly springing up around the country, waiting for those food lovers with the patience and perseverance to capture them.

Whether you find yourself in Italy or at home this spring, take advantage of these short-lived spring foods if you can. Fava beans come in a large, unappealing package, requiring layer after layer of peeling to reach the part worth eating. But believe us, it’s worth the wait. Known also as broad beans for their gargantuan (as far as beans go) size, favas are best in their early youth, while they are still tender enough to be eaten raw, dipped in salt or with a slice of Pecorino cheese. Like the elusive truffle, wild asparagus foraging locations are a guarded secret. Enthusiasts descend on their favorite spots as early as possible to beat out the competition. Related, though distinct from their cultivated cousins, wild asparagus must be eaten young and small, lest they become woody and inedible.

Though often saved for light, delicate preparations, such as lemon-scented risotto, wild asparagus can hold its own even in meaty dishes, like one of our favorite spring pastas at Ristorante Cesarino in Perugia, Rigatoni “alla carbonara” with sausage and wild asparagus. Each part of the borage plant – the star-shaped flowers, the herby leaves, and the prickly stems – has a flavor and use in the Italian kitchen that dates back to Roman times, when the plant was prized for its cucumber flavor.

Raviolis stuffed with a mixture of the whole plant are a March delicacy in Liguria, but you can make some parts of the plant last throughout the spring by candying, preserving or juicing the flowers. A cousin of the beet (barbabietole in Italian), bietole greens are found among the weeds of a garden left wild for the winter. Packed with iron, fiber, and calcium, they’re a tasty add-on to many recipes, such as spinach gnudi or pasta with sausage, and even stupendous when simply sautéed with garlic.

Though the bietole you find wild in Italy aren’t quite broccoli rabe or sugar beet greens, those are the most likely substitutes you’ll come across in the U.S. 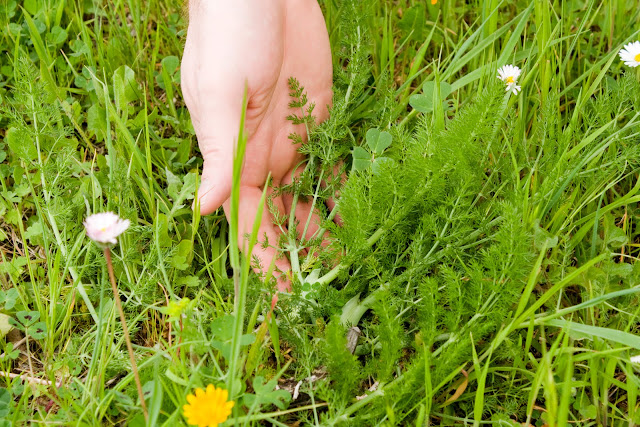 Image by Aldo Messina for Concierge in Umbria

While the fronds of cultivated fennel are often ignored in favor of the crisp, flavorful bulb, the situation is quite the reverse with wild fennel, prized for its greens.

Like dill, bits of fennel fronds can flavor pickles and other savory preserves, and like bietole, the greens make an excellent flavored addition to your pasta, upping nutrients while adding flavor.