It's a new year, and Italy would like to bring your attention to a new unsung “Cultural Capital” over the next 12 months. Cultural Capitals are small, jewel-like cities that have less star power than Venice or Florence, but offer their own understated beauty and artistic and architectural treasures to discover. Last year, the honor fell to the “Sleeping Beauty” of Mantua, a beautiful Renaissance center and UNESCO World Heritage Site between Milan and Venice, and this year the fêted city is the Tuscan town of Pistoia, just half an hour outside Florence at the foot of the Apennine mountains.

Christened “La Città dei Crucci”, or “City of Sorrow”, by Gabriele D’Annunzio, Pistoia has long had a reputation for being particularly contentious, with its residents embroiled in protracted battles between warring factions and families for centuries. “I love you, city of sorrow, bitter Pistoia,” wrote D'Annuncio, “blood of the Whites and the Blacks, that turns red before your proud people, men of ideology, with ancient joy.” Today, rather than bitterness and blood, you'll find Pistoians harbor a fierce civic pride and enduring affection for their home town.

Pistoia has grown in popularity over the past few years, as visitors to Florence look to escape the crowds in Tuscany's capital city by venturing out to the relative peace of the nearby provincial towns for day trips and overnights. If there was ever a time to visit Pistoia's pretty piazzas, elegant churches, and world-class museums, it is 2017...the calendar is full of special cultural events, exhibitions, and concerts and the center has been spruced up and is ready to receive travelers curious to explore one of the most charming small cities in Tuscany.

Piazza Duomo is the heart of Pistoia's historic center, home to the Basilica of San Zeno, the Baptistery of San Giovanni, and the soaring belltower, last renovated in the 13th century. Climb the 200 steps up its 67 meter height and enjoy the view from the top overlooking the town's terracotta roof tiles and the surrounding lush Tuscan countryside. Afterwards, stop in the cathedral, with its delicate green and white marble Pisan-Romanesque facade and “Madonna and Child” lunette by Andrea della Robbia. Inside, the Cappella di San Jacopo holds the “Dossale di San Giacomo” (Altarpiece of St James), begun in 1287 and finished by Brunelleschi two centuries later. Across the square, the 14th-century octagonal baptistery has an ornate marble exterior designed by Andrea Pisano. 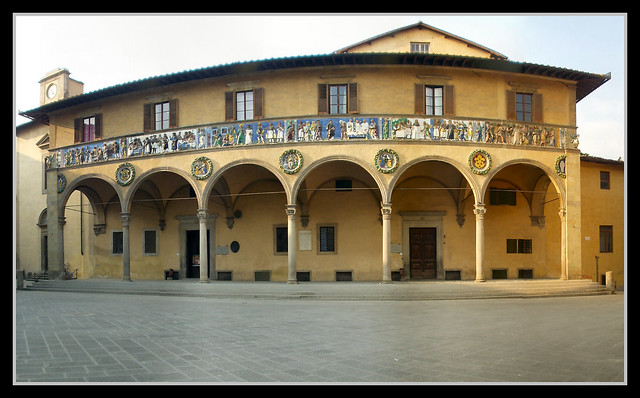 Near Piazza del Duomo, the former 13th-century hospital building Ospedale del Ceppo has a recently-restored facade with a stunning 16th-century terracotta frieze by Giovanni della Robbia and contemporaries depicting the Sette Opere di Misericordia (Seven Works of Mercy), and five tondi representing the Virtù Teologali (Theological Virtues). The building is closed to the public, but take the Pistoia Sotteranea guided tour through the its underground warren of passageways and tunnels, including the anatomy amphitheater and the collection of antique surgical instruments.

Pistoia has a surprising number of museums for its size, particularly contemporary art collections. The Museo Marino Marini located inside Palazzo del Tau is devoted to local sculptor and painter Marino Marini, one of the city's most famous artists who died in 1980. The Museo Civico in the Palazzo Comunale features works by Tuscan artists from the 13th to the 20th centuries, and Palazzo Fabroni picks up from the 20th century with its contemporary temporary exhibitions and permanent collection, including works by Pistoia-natives Mario Nigro, Fernando Melani, and Marino Marini. If you enjoyed the pieces by Fernando Melani, you can request a tour of his casa-studio in town, open to the public upon request.

For something completely different, visit the city's Lace Museum, located in the 16th century Palazzo Rospigliosi along with the Rospigliosi and Diocese Museum. This museum conserves and exhibits historic lace and textiles from Pistoia beginning in the 17th century, produced first by convents and monasteries in the city and surrounding countryside, and later by girls' schools and guilds for personal lingerie and trousseaux.

Unlike Florence, Pistoia does not have high-end boutiques and luxury designer stores, but its center does have a number of interesting clothing and home accessory stores. For a more authentic shopping experience, you can visit the bustling daily market in Piazza Della Sala, the social heart of the historic center. In the adjacent Piazzetta degli Ortaggi, home of the former Jewish Ghetto and the town market until the 1800's, you can take a look at the “Giro del Sole”, a fascinating contemporary sculpture of three blindfolded men by Pistoian artist Roberto Barni.

Pistoia's two main annual events, Pistoia Blues and the historic Giostra dell’Orso (Joust of the Bear), are both held during the month of July. That said, in 2017 Pistoia will be hosting a number of extraordinary events and concerts, most importantly as part of Florence's famed Maggio Musical Fiorentino in May. For an updated and interactive calendar, visit the Pistoia Culture Capital website.

Pistoia is in the heart of Tuscany, and the perfect spot to sample some of the most traditional dishes from this region. Chianina, the heirloom beef from which the iconic Fiorentina steak is cut, is featured on many menus, as are historic “peasant” recipes like pappa al pomodoro and ribollita. La Panzanella (Via Spedaletto 21) and L’Antico Locanda (Via Bolognese 241) are two local favorites for informal yet hearty meals where you can taste Tuscany's iconic simple yet unforgettable cuisine.

If you only have time for a quick glass of wine, the Enoteca Baldovino (Via del Fiore 20) has an excellent selection of local labels and serves light dishes to pair them with.