Food is not taken lightly anywhere in Italy, but in Naples it is the subject of passionate arias and earnest odes. And of all Neapolitan classics, the two that are most exalted and celebrated are also two of the most humble home dishes: ragù.

Naples has two types of traditional ragù, both of which call for long, slow cooking; are generally more flavorful the next day; and serve as an all-in-one dish of both pasta sauce for the primo and tender, braised meat for the secondo. The tomato-based 'o rraù and the onion-based la genovese are both such traditional staples of festive lunches in famiglia, that many Neapolitans believe that Sunday isn't Sunday without a plate of ragù.

Most people think of ragù alla bolognese when they think of ragù, and Neapolitan ragù and its cousin from Emilia-Romagna are certainly similar. There are a few important differences, however: ragù alla bolognese is made with an initial soffritto (minced onion, celery and carrot sweat over a medium flame until soft), minced or ground beef and pork, white wine, milk, and just a dollop of tomato paste or sauce. The resulting dish, after a long simmer, is tossed with pasta and served as a primo.

Ragù napolitano, or 'o rraù, is a bit heavier on the onions in the soffritto, uses red wine and copious amounts of tomato sauce, fresh basil, and—most importantly—a large cut of beef either left whole or cut into just a few large pieces. This dish is also simmered for hours until meat is fully braised and starts to break down, and the finished sauce is used on pasta (or layered with manfredi—a flat noodle that is long and wide, with ruffled edges—and ricotta to make a sort of Neapolitan lasagna) as a primo while the tender meat is sliced and served as a secondo. 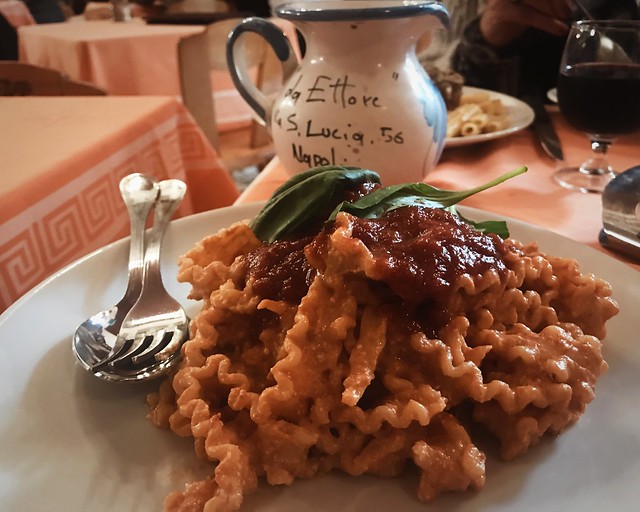 'O rraù has a theatrical legend fit for the drama-loving Neapolitans, filled with cruel medieval noblemen, talking three-month-old babes in arms, plates filled miraculously with blood, penitence, redemption, and pasta. The sadly mundane truth is that ragù comes from the French ragout, a stew of meat and vegetables.

It may surprise you to learn that Naples' second beloved ragù doesn't have a drop of tomato sauce in it. This dish is made by braising a large cut of beef—either left whole or cut into just a few large pieces—for hours and hours in basically nothing more than lots of sliced onions, white wine, and broth. Like 'o rraù, the meat starts to gradually break down, and the sauce is traditionally tossed with a short pasta like rigatoni or ziti for pasta alla genovese, while the meat is sliced and served separately. 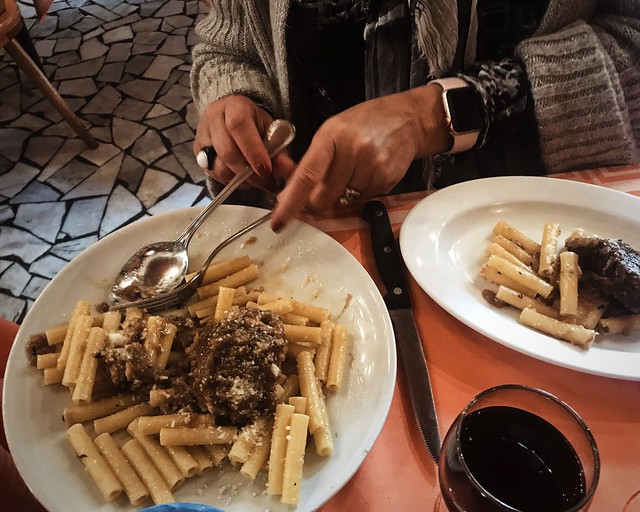 Despite being named for the city of Genoa, la genovese is a quintessential Neapolitan dish that is almost impossible to find outside of the region of Campania. It was probably introduced to the city in the 15th or 16th centuries by sailors from Genoa, as Genoa and Naples were two of the most important ports on Italy's western coast and there was intense contact between the two cities at the time. Genoa slowly forgot its traditional dish, but in Naples it rose to iconic status.

Both 'o rraù and la genovese are prepared according to family recipes that are passed down from generation to generation, with slight variations and secret ingredients. When we last visited Naples, we were lucky to catch one of our favorite eateries—Da Ettore on Via Santa Lucia—on a night when they were celebrating o'rrau napoletano and other traditional Neapolitan dishes. We sampled their takes on manfredi o’rraù e ricotta and pasta alla genovese, and our waiter ensured us that it was as close as you could get to having Sunday lunch with a Neapolitan family.

We had never had la genovese, but immediately fell in love with the wine-y, onion-y braised beef and have been making both 'o rraù and la genovese at home because the slow simmering makes the house smell just like a Neapolitan kitchen on Sunday. And, like a Neapolitan mamma, we also like the convenience of making a primo and a secondo in the same pot and having leftover sauce to use throughout the week.