Italy's historic “cucina povera” rustic cuisine is heavily influenced by the deeply-rooted Italian tradition of rural families raising and home-butchering a pig (or two) each winter to see them through the year. Pigs are one of the easiest and most inexpensive stock animals to raise, and for centuries the symbiotic relationship between grazing pigs on acorns and chestnuts from the towering trees lining sown fields, which were in turn - ahem - fertilized by the foraging animals' passage, was essential in keeping Italy's tiny subsistence family farms productive and maintaining the picturesque patchwork countryside of fields and woods that covers much of the country. 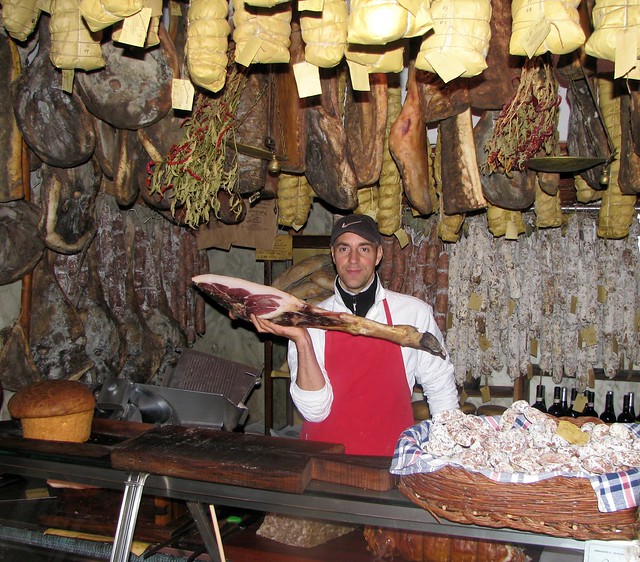 Though the custom of raising a family pig is gradually disappearing as the Italian population becomes increasingly urban and wealthy, the popularity and ubiquity of pork in the national diet continues. From charcuterie to grilled ribs, Italians love their excellent domestic pork and don't shy away from thick, flavorful ribbons of fat running through their *prosciutto* and lining their chops or, in the case of lardo di colonnata, served thinly sliced on toasted bread. Be sure to sample some quality local pork while visiting Italy, and you'll understand why this delicious specialty is Italy's favorite white meat. 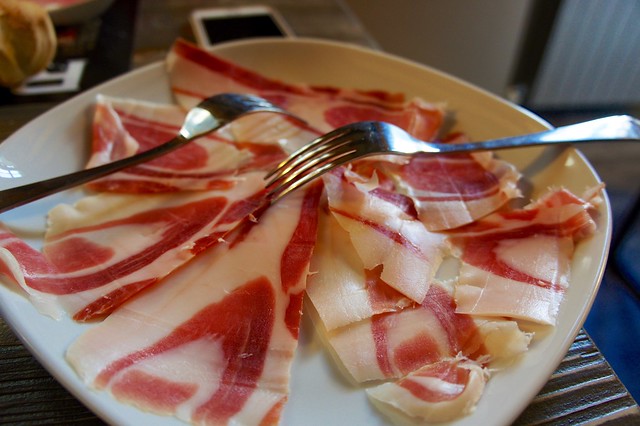 Pork “Made in Italy”

Much of the commercial pork found in large supermarkets is imported from northern Europe, primarily Holland. More expensive domestic heirloom breeds, however, produce the more flavorful and prized meat used in geographically protected DOP or IGP pork specialties from prosciutto to porchetta. 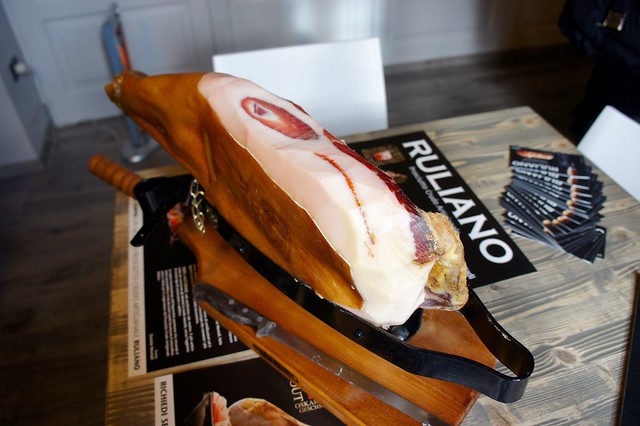 Like beef, pork is strongly tied to Italy's geography and its heirloom breeds are largely named according to region. There are about 40 breeds considered wholly or partly of Italian origin, six of which are recognized and protected by the Italian Ministry of Agriculture as heirloom breeds: Calabrese, Casertana, Cinta Senese, Mora Romagnola, Nero Siciliano, and Sarda. Of these, the most famous is Tuscany's Cinta Senese, beloved by chefs and gourmands for its rich ribbons of sweet fat and flavorful meat. 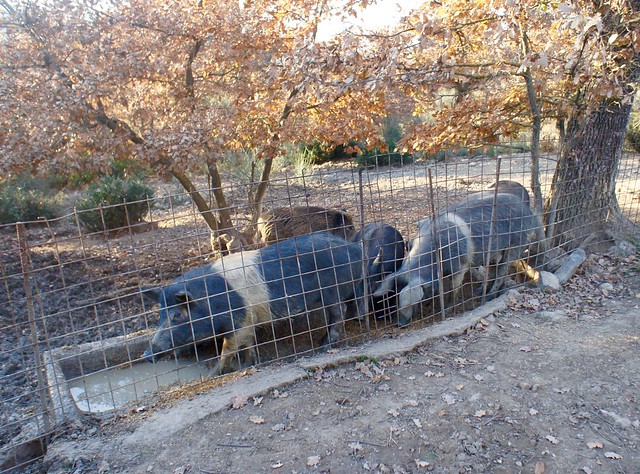 The Cinta Senese, like many of Italy's heirloom pork breeds, was almost lost in the forty years after World War II, as Italian farmers began to import breeds from northern Europe and Britain which matured faster and produced the leaner meat more popular with the country's increasingly urban population. Though raising faster growing breeds made economic sense, over the past few decades Italians have been returning to the much richer flavor of their heirloom pork, bringing a number of breeds back from the brink of extinction. 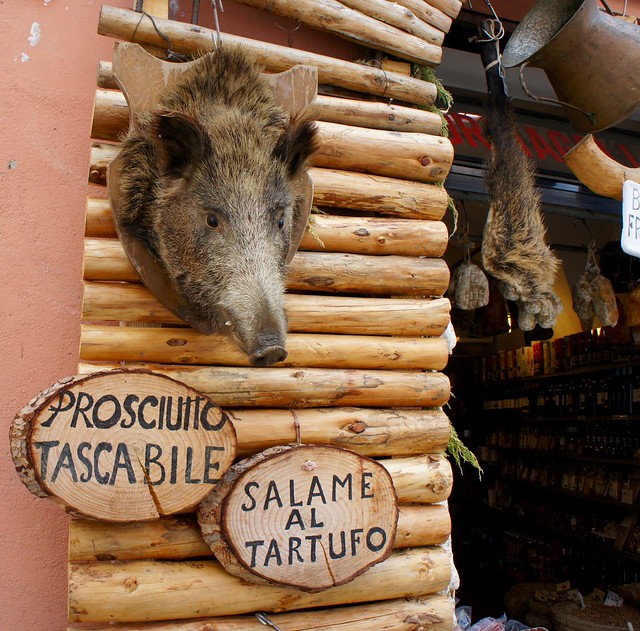 Cinghiale, or wild boar, presents the opposite problem: their booming populations in the wooded mountains of central and northern Italy are causing massive amounts of agricultural damage to vineyards and crops, and Italy has begun to take measures to cull their numbers in a country in which there are fewer hunters and more proliferate boar breeds than in the past. The strong, gamey meat of the cinghiale is also popular in Italy's cucina povera, where it is primarily used to make a rich ragù or cured in prosciutto or salame.

Pork on Your Plate

You won't have to go to great lengths to sample local pork in Italy. Unless you are staying on the coast where fish takes precedence, there is rarely a meal in Italy in which pork doesn't appear in anything from a cameo to a starring role. Here are some excellent options for tasting Italian maiale:

Street food
Though Italy does not have a huge street food culture, in market squares across Tuscany and Umbria people line up by the white porchettaio trucks to order their towering porchetta sandwiches to take home or eat on the run. Porchetta is a a whole roasted pig, boned and spiced with rosemary, fennel, garlic, salt, and pepper. The juicy meat and crisp crackling is then sliced and served on a crusty roll, perfect for a filling snack on the go or an impromptu picnic. 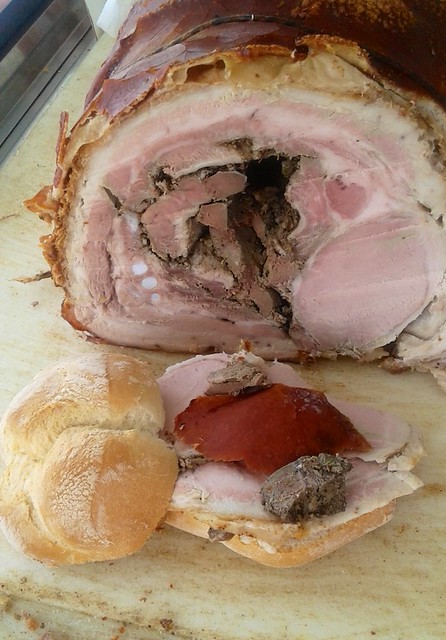 Antipasto
One of the most classic and common antipasto offerings both at home and when dining out is the tagliere di affettati, or a charcuterie platter featuring local cured pork including prosciutto, salame, and salsicce. Depending upon the region in which you are dining, the selection may include Prosciutto di Parma, San Daniele, or Norcia; culatello; speck; capocollo; soppressata; finocchiona; and felino. 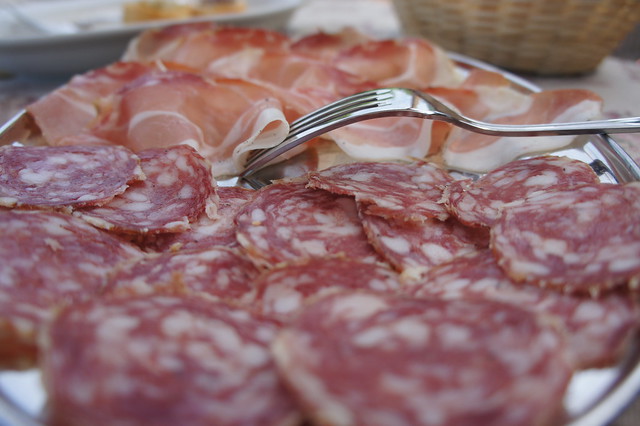 If you are dining in Tuscany, you may be plied with buttery Lardo di Colonnata, fatback layered with salt flavored with peppercorns, cloves, cinnamon, coriander, sage, and rosemary and aged for six months inside Carrara marble troughs. The final product is sliced paper thin and served on warm, toasted bread. 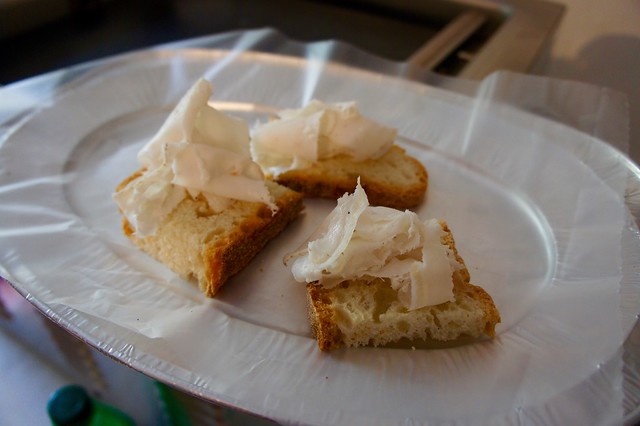 Far to the south in Calabria, you can challenge yourself to ‘Nduja, a smooth spread of pork meat and fat ground with roasted hot red pepper and spices. One of the pillars of Calabria's red hot cuisine, 'nduja is added to a number of dishes for extra kick, or served spread on bruschetta.

Pasta
Pork is most often added to pasta sauces to give it extra flavor in the form of guanciale, or pork jowl, and pancetta, or pork belly. Even dishes which proclaim to be “vegetarian” often have small cubes of guanciale or pancetta in the sauce, as many Italians don't consider this addition to be a “meat”. Two of Rome's most traditional pasta dishes, L'Amatriciana and La Gricia, are based on very simple sauces which feature guanciale as one of the few ingredients. La Carbonara, also common in Rome but also found across Italy, is based on a simple sauce of eggs, cheese, and either guanciale or pancetta. 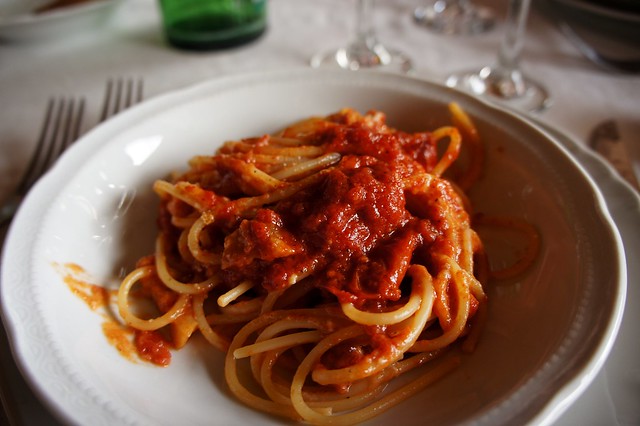 In Emilia Romagna and much of central and northern Italy, filled pastas like tortellini, cappelletti, and agnolotti use a mixture of ground beef and pork and are served with either a light sauce or in broth. 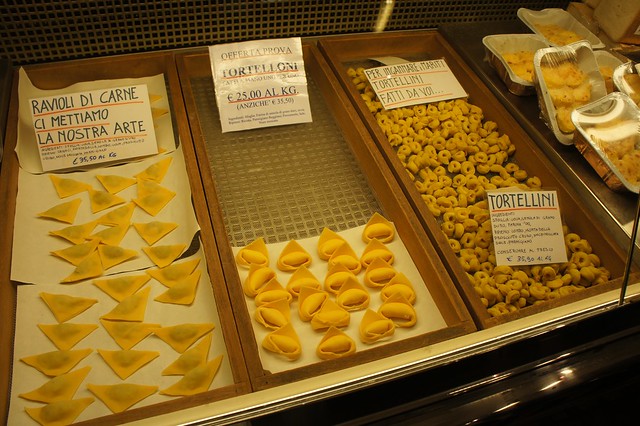 In Umbria, one of the most popular pasta dishes is alla Norcina, served with a cream sauce flavored with local sausage and sage. Pasta tossed with sausage and vegetables or with a tomato sauce made with ground sausage are also common first courses.

Main Courses
By far the most popular pork main course is the simple yet unforgettable grigliata, a mixed grill that usually includes a small pork chop (bistecca), sausages (salsicce), and a few ribs (braciole or puntarelle). This is the most rustic option, but if the pork is particularly fresh and heirloom, the most delectable. 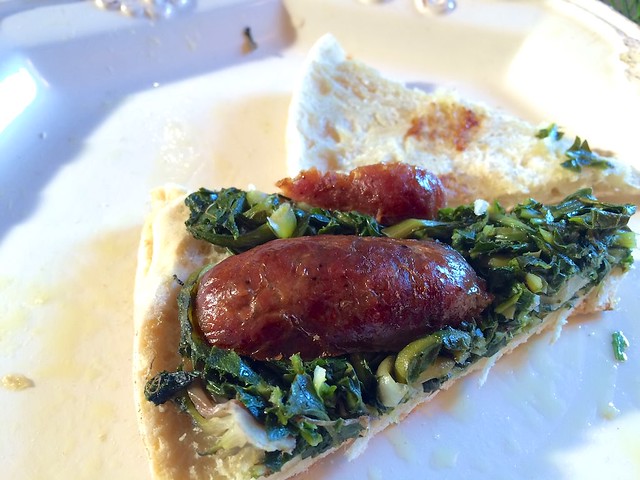