Italy is a land of festivals. Religious festivals, historic festivals, festivals that celebrate food or wine, festivals that last for weeks or are here and gone in a day. Italians love to throw a party, and from the tiniest of village piazzas to the overflowing streets of the most cosmopolitan cities, there is no better place to get a taste of Italian culture than at a festa.

Very few of these local festivals are known beyond the borders of Italy (indeed, many are so local that even folks a few towns over don’t know about them), but there is one exception: the raucous, overwhelming, marginally anarchical but thoroughly heart pumping rave that is Siena’s Palio. 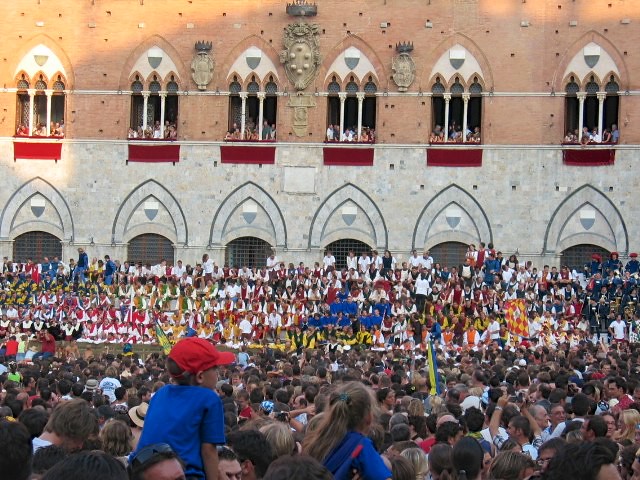 The Palio dates from the 1600s, when the city’s quarters, or contrade, first began organizing public races in the city center. Originally crossing the city, they were later confined to the Piazza and evolved from buffalo to donkey to the modern horse race.

Today Siena has 17 contrade, but only ten are allowed to participate in each year’s race (the seven which did not participate the preceding year plus three chosen by lottery). Though the focal point of the festivities is the horse race, the Palio is a much larger event (indeed, for the citizens of Siena, a way of life) marked by pageantry and faith. 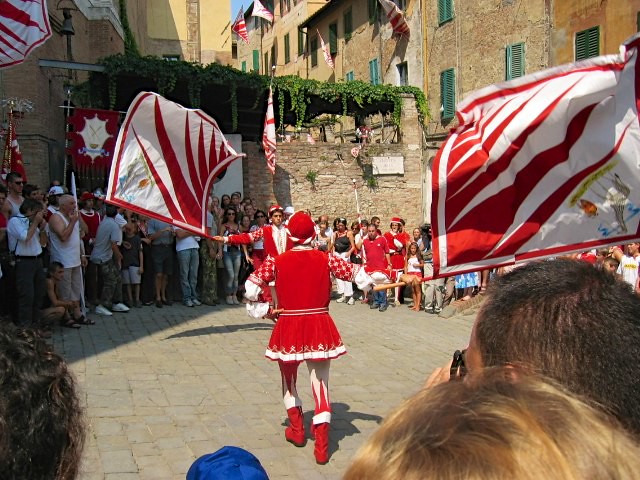 The pageantry reaches its height during the corteo storico, a procession in Medieval costume with drum and flag corps, ox-driven historical carts, and much ceremony immediately before the race. The faith, instead, at the ritual blessing of the horses which takes place at each contrada’s neighborhood church on the afternoon of the race.

Though Il Palio culminates in the race (which lasts only a few minutes), the festival itself covers four days of pre-race trials, horse trading (or, given that the contrade are assigned their horses two days before the race and cannot switch, jockey trading), a festive pre-race dinner, much negotiation and alliance-forming between the competing contrade, and a general air of electric anticipation. 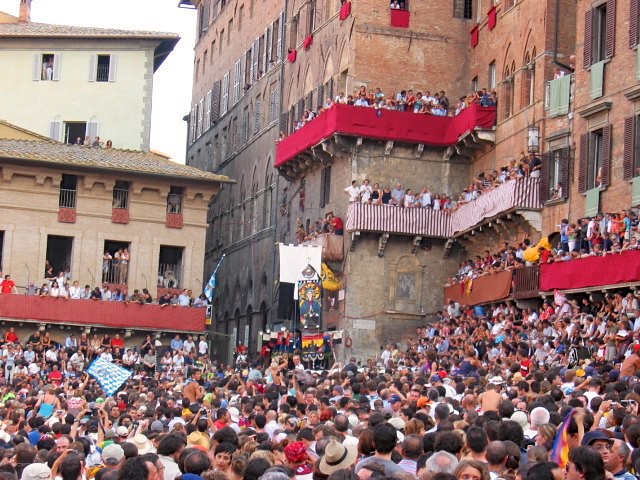 After the horses have been assigned (and then carefully watched over by their contrade for the following three days to avoid sabotage), the jockeys chosen (and often changed up, which can be done until the day of the race), the citizens feted, and everyone blessed, it’s time to race. 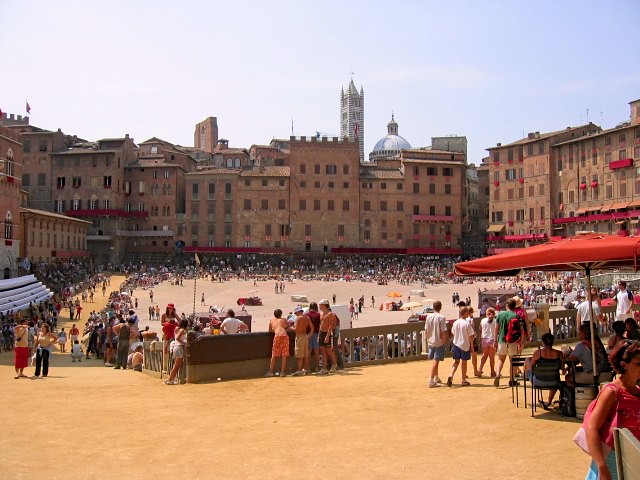 Sometime after 7 pm, a mortar is fired to warn the spectators packed into the center of the square that the ten competing horses are entering the track. Don’t expect the race to get underway immediately, however. First the horses must enter a special area at the starting line (called the mossa and marked by ropes stretched across the track) in the specific order in which the contrade names have been drawn and are called by the official mossiere.

When the horses have all entered in the correct order, the final horse may now enter at a run and the ropes, or canapi, fall. The race has begun!

Not so fast. Often the final horse (and his jockey) take their sweet time entering the mossa, trying to gain advantage by the position of the jostling horses and wheeling and dealing jockeys. In the meantime, horses may decide to back out of the mossa, and the whole process of entering in order must begin again. 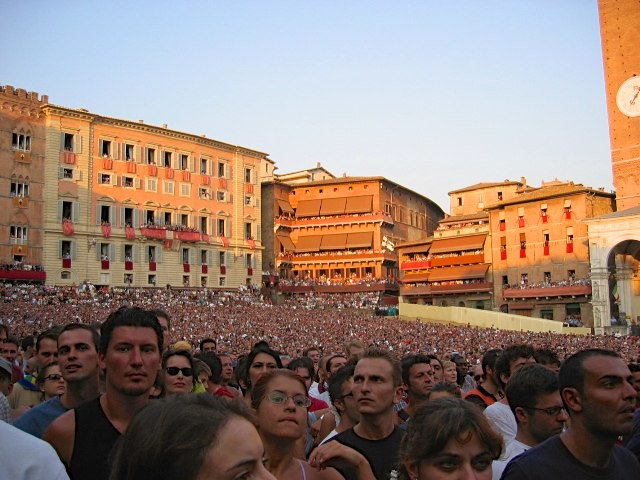 And just when spectators begin to worry that the race will never begin, they are off! A crazy cloud of pounding hooves and whipping jockeys (who aim more lashes at the rival jockeys than they do at the horses), circles the screaming crowd of local contradaioli at a gallop three times around the piazza and toward the finish line (often without the jockey, who isn’t necessary for a horse to win). As the winning horse crosses the finish line, total mayhem breaks out as the winning contradaioli (and their allies) erupt into frenetic celebration and the losers shower them with abuse.

Seeing the passion and preparation surrounding the Palio can be an unforgettable experience, but should be approached with care. The Piazza del Campo is a crush of people the day of the race who stand in the scorching sun for hours with no seating, shade, bathrooms, or exit. If you are interested in participating in the Palio, we strongly suggest you let us organize seats or a balcony with a buffet to be able to enjoy the day in comfort. 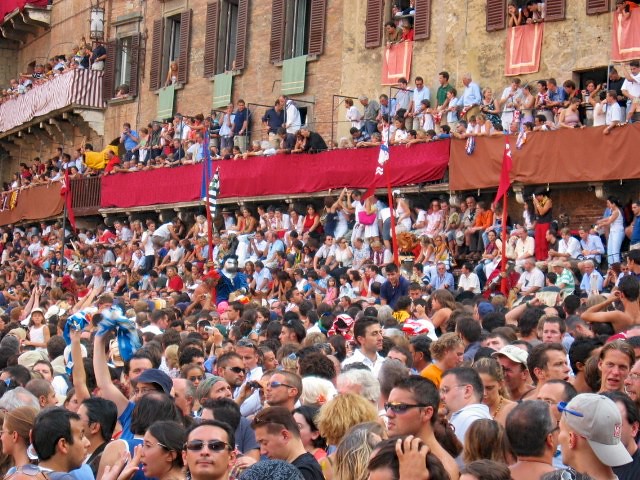 Also, the same deep passion the Sienese have for their Palio that is so moving and unique can sometimes bubble over into something less benign. We can organize your visit accompanied by a local guide who will be able to share with you the best of this Sienese tradition and steer you away from the worst. 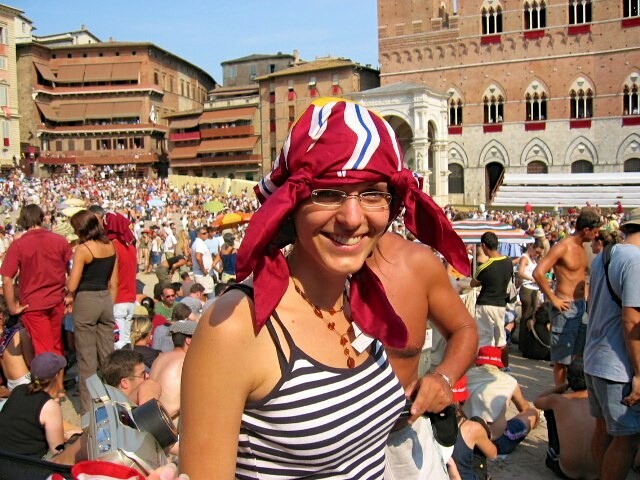 And as long as you’re in town for the Palio, don’t miss out on some of Siena’s treasures that are closed to the public for the rest of the year. The 14th century Palazzo Salimbeni (headquarters of the historic Monte dei Paschi di Siena bank) is open during the Palio festivities, and visitors can view the art collection and rooftop terrace overlooking the historic center. In August, the protective coverings over the Duomo’s spectacular marble floors are removed, revealing the masterpieces underneath.

Related Posts:
I Santi e I Morti: Italy’s All Saints and All Souls Days
Siena’s Duomo Floor Revealed
Traveling Between Rome, Florence and Venice: Stopovers to Round Out Your Trip
Ferragosto: Chiuso per ferie