With its sublime alchemy of ancient ruins, exquisite art, and vibrant neighborhoods, Rome's charismatic capital is one of the most captivating cities in Italy. Unfortunately, the secret is out...which means that the Eternal City can be relentlessly crowded around the cluster of its most iconic sights in the historic center. After a day of touring, get a respite from the urban chaos and discover the city from what may arguably be its best angle by heading a few floors above the streets to one of the many rooftop restaurants, bars, and clubs. 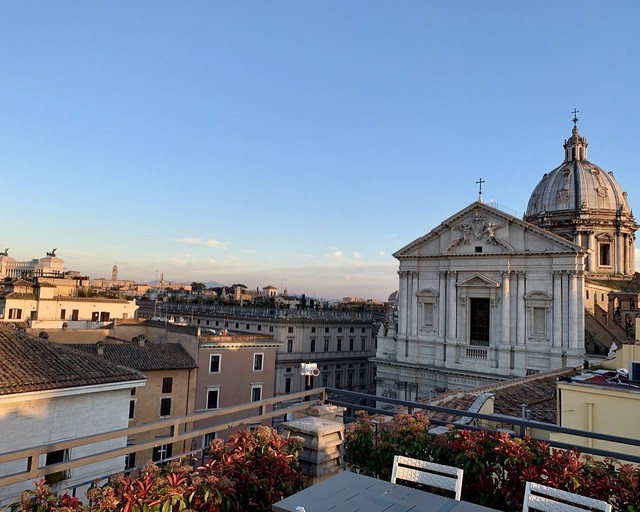 Rome has long had a semi-hidden rooftop scene, but the number and quality of panoramic venues overlooking the heart of the city has exploded in recent years and most hotels worth their salt have revitalized their top floors to house everything from pools to cocktail lounges. Here are a few of the best for relaxing and soaking in the view, dining, or simply basking in the heady La Dolce Vita atmosphere above Rome's cupolas and domes.

There are a few hotel rooftops in Rome's city center that house a pool with a view, and you can purchase a pass to use the pool and adjacent facilities even if you are not a guest.

Sky Blu Pool Terrace at the Aleph Rome Hotel
Via di San Basilio, 15 (Via Veneto)
Generally considered the best rooftop swimming pool in Rome, this 6th-floor terrace offers a scenic pool with sun loungers during the day, which transforms into an informal yet sophisticated cocktail bar with city views, live dj sets, and a relaxed urban vibe in the evening. The more adventurous can check out the shisha (hookah) corner which offers a Middle Eastern tradition not commonly found in Rome.

Radisson Blu Es
Via Filippo Turati, 171 (Termini)
Though set in the rather tatty area surrounding the Termini train station, the central location is actually boon to those who are guests elsewhere in the city but want to purchase a day pass to relax at this sleek rooftop pool and sky lounge. Feel worlds away from the bustle of Termini, and extend your stay in to the evening cocktail hour for a drink and finger food with a sweeping view over the city.

Palazzo Naiadi Roma
Piazza della Repubblica, 47 (Centro Storico)
It doesn't get more indulgent than the rooftop pool and spa at this sumptuous five-star hotel. With its elegant, adult atmosphere (and gulp-inducing prices), this is not a good choice for families, but couples who want to pamper themselves with a spa entry and massage (included in pool passes), and then linger poolside on the terrace above Piazza Repubblica to enjoy views of the historic center are in for a treat.

One of the best times of day to savor the view over Rome's rooftops is as the sun is setting, which, as luck would have it, coincides with Italy's convivial aperitivo cocktail hour. Here are a few good choices for a panoramic drink.

Up Sunset Bar at La Rinascente
Via del Tritone, 61 (Barberini)
Locals in the know head to this rooftop lounge hidden on the top floor of the newly remodeled La Rinascente department store just a short stroll from the iconic Trevi fountain. This is the perfect peaceful perch at the tail end of your day of touring for settling in to sip a cocktail with stylish Romans. The 6th-floor lounge and bistrot is run by Michelin-starred chef Riccardo Di Giacinto, so you may want to try the nibbles.

Hotel Palazzo Navona
Largo della Sapienza, 8 (Piazza Navona)
This chic four-star hotel has an outstanding roof terrace bar, with a dreamy view that stretches across Rome's historic center and includes dozens of domes, spires, and monuments. Linger over a drink as you look across to the low dome of the Pantheon, and the more ornate cupolas of Saint Ivo alla Sapienza, Sant'Agnese in Agone, and Sant'Andrea della Valle.

Achilli at DOM
Via Giulia, 131 (Campo de’ Fiori)
A bit too cool for its own good, the boutique luxury hotel DOM redeems itself with its fabulous rooftop, a favorite haunt of Rome's jet set. Though only four floors up, the view is delightful, with the rooftops and bell towers to one side and the Tiber River and lush Gianicolo Hill to the other. The hotel's cocktail bar is considered among the trendiest in the city and its restaurant moves up to the terrace in the summer months, so you can choose to imbibe or dine.

Tables with a View

Aroma Restaurant at Palazzo Manfredi
Via Labicana, 125 (Colosseum)
Just as there is no more iconic monument in Rome than the Colosseum, there is no more iconic view then that of the Aroma Restaurant, with a rooftop restaurant so close to the Roman amphitheater it seems like you could reach out and stroke its ancient stone. One of the most exclusive Michelin-starred restaurants in Rome, Aroma isn't easy on the wallet. But for an unforgettable, once-in-a-lifetime dinner with a view, this is the place.

Giardino at Eden
Via Ludovisi, 49 (Via Veneto)
Walk past the rather heavy-handed entrance hall and take the elevator straight to the top floor Giardino restaurant, a soothingly sleek haven of mid-century sophistication and upscale cuisine. From its perch on the Pincian Hill, you can take in mesmerizing views across the city to the magnificent Vittoriano monument and dome of Saint Peter's Basilica, as well as the Borghese gardens and Villa Medici. 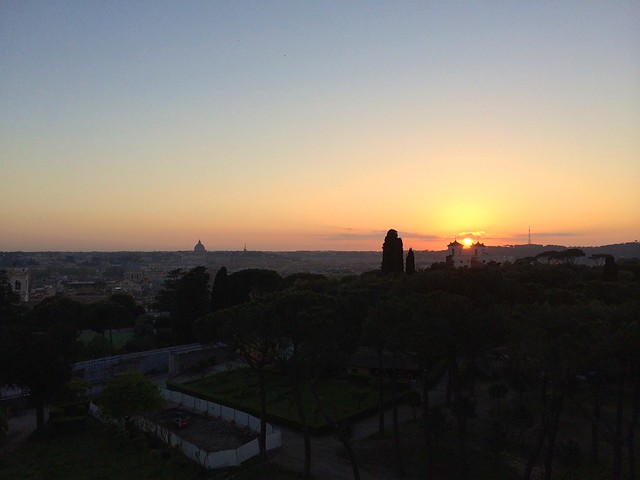 La Terrasse Cuisine & Lounge at Sofitel Rome Villa Borghese
Via Lombardia, 47 (Via Veneto)
This landmark hotel in the heart of Rome has been closed for a major facelift for months, but will be unveiling its new look in July of this year. Long considered one of the best rooftop restaurants in Rome with stunning views across the city, this complete makeover will only confirm its top ranking for a romantic dinner in the city center.