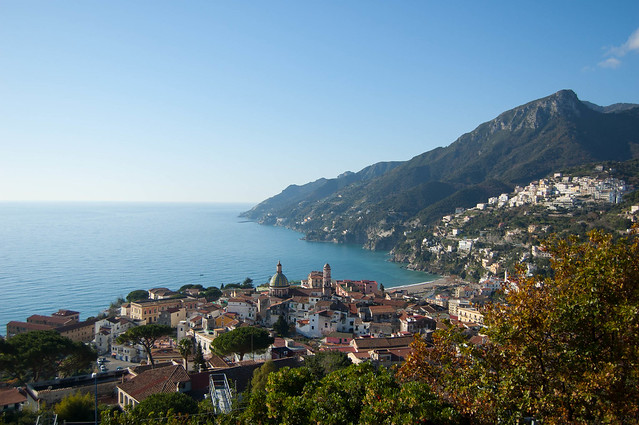 Everywhere you look on the Amalfi Coast—from the floors of elegant private villas to the domes of 17th-century churches—you’ll find brightly painted majolica tiles inspired by the jewel tones of the Mediterranean: the blues of the sea, greens of the lush cliffs, and yellows of the lemon groves. These terracotta tiles are made in Vietri sul Mare, a tiny seaside village just north of Salerno known as the “Gateway to the Amalfi Coast” and mecca for ceramic collectors drawn to the artisan shops crowding the historic center, many of which have been producing hand-painted tiles, decor, tableware, and religious art for generations.

Though Vietri has been an important center for ceramic production since the 15th century, the town’s fame peaked in the 1600s, when Vietri majolica became fashionable among the Neapolitan aristocracy. The town went from sleepy village to thriving artisan capital in just a century, and its large ceramic murals of saints and religious scenes became ubiquitous in coastal churches and edicole, small shrines often found on city streets or in niches on the facades of private palazzi. 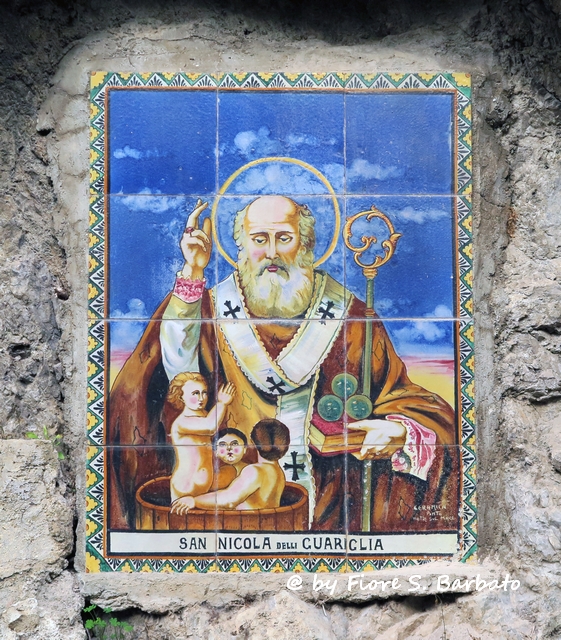 By the late 1800s, Vietri’s majolica production had begun to slow, as industrial ceramic production and mass migration of southern Italy’s poor coastal populations towards the northern regions and across the Atlantic took their toll. The arrival of European artists on the Amalfi Coast led to the town’s revival in the 1920s, however, as these newcomers brought with them a creative influx and appreciation for the history of Vietri’s traditional ceramics. 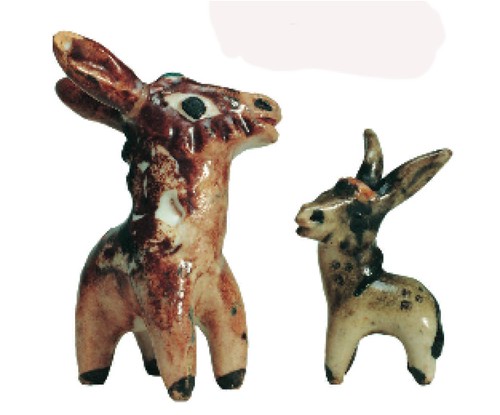 During Vietri’s “German Period”—an homage to the influence of artists and artisans hailing from Germany—from the early 20th century to 1947, the local ceramic production expanded and evolved away from religious themes to favor depictions of the local landscape and its people: fishermen, washerwomen, fishing boats, ciucciariello pack donkeys, the coastline, and the Mediterranean. In addition, German artisans brought with them new technical skills in engineering and chemistry, contributing to the development of a number of signature colors, including “Vietri yellow”. Vietri’s primary production today is whimsically colorful decorative and artistic ceramics and tableware.

Ceramic Capital of the South

A quick stroll through the center of Vietri is enough to understand why this seaside town is known as “Ceramic Capital of the South”. Vietri and its long history of majolica production are inextricably intertwined, and everything from the bright blue-and-yellow-tiled dome of its 18th-century Neapolitan Renaissance Church of San Giovanni Battista towering above the village rooftops to the prettily hand-lettered ceramic street signs is a reminder of this symbiosis. 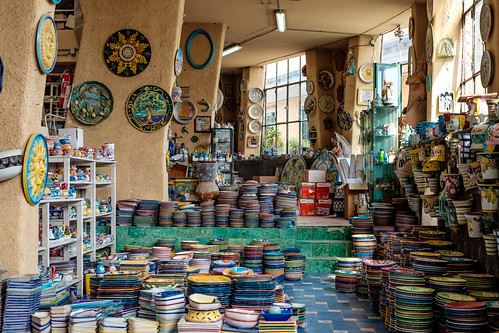 Most local homes and shops are adorned with colorful tile murals and majolica shrines, but the true heart of Vietri’s production is the pedestrian Via Madonna degli Angeli. Here, the town’s famous ceramic shops sit shoulder to shoulder, each with a painted facade and jumble of wares spilling out onto the sidewalk more eye-popping than the one before. Though the styles may seem similar at first glance, each shop specializes in a particular artist’s production and varies in palette and technique. One favorite local motif for decorative ceramics and tableware is campagna, a charmingly rustic naïf style featuring farmyard animals and fish rendered in bright Mediterranean colors.

The Past and Future of Vietri Ceramics

To delve more deeply in Vietri sul Mare’s tradition of majolica, the Museo delle Ceramiche di Vietri in the village of Raito perched high above Vietri is a fascinating stop. Housed in the beautiful Villa Guariglia, the museum’s collection includes pieces dating from the 17th century to the German Period, tracing the evolution of Vietri’s style from the early somber religious art to the works of German artists Richard Dolker and Irene Kowaliska, known for their modernist designs inspired by the Odyssey, and Margarete Thewalt-Hannasch’s Madonnas and Nativity scenes done in a 20th-century color palette. 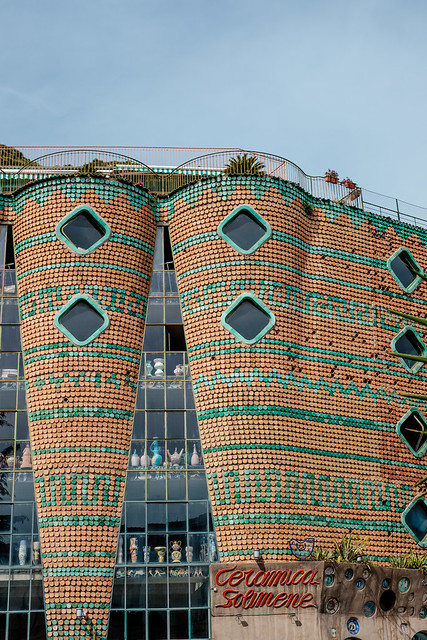 After learning about Vietri’s past, get a glimpse into its future at the striking Ceramica Artistica Solimene factory, designed by Frank Lloyd Wright protégé Paolo Soleri in 1954. His unique building, one of the few examples of modern architecture on the Amalfi Coast, was clearly influenced by Lloyd Wright’s style, and is clad in colored circular ceramic tiles and glass outside and inside sells Solimene’s distinctive modern majolica.

Most of what makes the Amalfi Coast so unforgettable can’t be taken home with you, but a colorful piece of Vietri majolica can be a lovely reminder of the coast’s deep turquoise waters, lush lemon groves, and dramatic cliffs until you can make it back for your next visit.

Consider having your purchases shipped, as most shops in Vietri sul Mare can easily take care of international shipping arrangements and you can avoid running afoul of restrictive airline luggage limits. If you have made a significant investment and do decide to carry your purchases with you, you can claim your VAT refund at the airport before you fly home.